'From under this dirty dystopia comes a garbageman-cum-hitman'

A review of Shovel Ready 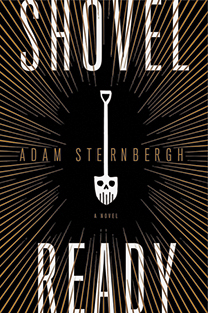 The New York in Adam Sternbergh’s novel is of the not-too-distant-future variety, where the rich live behind high walls and armed guards, and the poor subsist everywhere else. Successive boom-and-bust tides have all but wiped out the middle, a process quickened by a strategically placed dirty bomb in Times Square. Radiation, not real estate prices, has rendered Gotham unreachable. The wealthy live their lives out on the “limnosphere,” the bandwidth-sucking version of the Internet in which the user is immersed in their fantasy of choice, as nurses and men with guns care for their worldly bodies.

Out from under this dirty dystopia comes Spademan, a garbageman-cum-hitman who lives with the memory of his wife, killed in the explosion, and who now boats across from Jersey to murder for money. His client, a televangelist named Harrow who needs his daughter killed, is a special kind of monster: he promises his flock limnosphere heaven, if only to harvest their minds and bodies for a hyperreal version of the same for his biggest donors. The daughter, the scared but streetwise Persephone, is with child, possibly by her father; Spademan, who doesn’t kill kids, goes from killer to protector. He is hounded by the real and virtual versions of Harrow, both equally repugnant and violent, and his well-armed posse of true believers.

There is every opportunity for cliché in the post-apocalyptic necropolis genre, particularly with the added Matrix-esque ethernet fantasy world. Yet Sternbergh, an editor at The New York Times Magazine, navigates the familiar terrain with a deft hand. He writes in jerky, reductive bursts often devoid of punctuation. Backstory is dispensed with in quick paragraphs, while dialogue and description are jagged stanzas. There’s more than a touch of Cormac McCarthy in here, right down to the nihilistic violence meted out by way of exotic weapons (box cutters, a “hurlbat,” and something called a “sjambok”). The New York City of Shovel Ready, meanwhile, can be one of two things: a cautionary tale of the city’s ever-widening income gaps, or a boffo survivalist set piece for the technology-wary. (Or both, if the current Hunger Games obsession is any indication.) Yet Sternbergh wisely keeps the story from veering off into sci-fi land by being largely uninterested in the how and why of the netherworld he creates. He is more interested in the near-lifeless bodies it leaves behind.