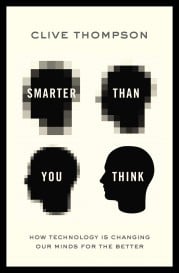 As his title suggests, Thompson takes a firmly optimistic view of the role technology plays in modern life. With a seemingly inexhaustible supply of examples, anecdotes, research results and interviews, he illustrates the many (and often surprising) ways in which computers and connectivity are giving us all greater powers—from recalling basic facts to collaborating with others to solve problems to discovering new ways to interact with our surroundings. Improvement appears inexorable.

He explains how amateur chess players can now beat grandmasters, as well as chess supercomputers, by combining basic human strategizing with the brute-force calculating power of simple laptops. Man and computer working in unison—what Thompson calls Centaurs—produces something much more effective than the sum of the parts. The happy result is “new levels of human excellence.”
Many of the common criticisms of the online world are also effectively deflated, such as the notion that Internet usage degrades literacy skills. Thompson instead points out the importance of “the audience effect.” Asking schoolchildren to post their work on blogs vastly improves the quality of their writing because they realize others will be reading and critiquing their work; as a result, they spend more time editing and polishing.

Despite all the cheerleading, however, there’s clearly a distinction between being smarter and being better off. Many of Thompson’s examples seem cherry-picked and unsatisfying on reflection. He rhapsodizes over the role of social media during Egypt’s Tahrir Square protests and in freeing a jailed journalist. But true as this may be, Twitter certainly hasn’t changed the bigger picture. Democracy remains on hold in Egypt and could be for some time. The same goes for another example of online environmental activism from China. And while the distribution of U.S. electoral-district-mapping software may make it easier to uncover evidence of political gerrymandering, this hasn’t put an end to that practice, either.

The question remains: If technology is making us smarter, how come we still can’t solve the really big problems?