Ripped apart by civil war, the island nation 'has forgotten any other way to live' 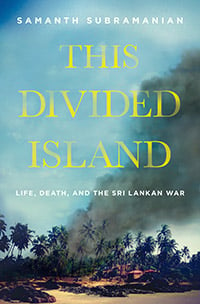 This Divided Island by Samanth Subramanian. No credit

The Sri Lankan civil war came to an abrupt end on a sandy beach in May 2009. The government army was unrelenting in its shelling of a three-square-kilometre strip in the island’s northeastern part, which sheltered an estimated 100,000 civilians used as human shields by the rebel group Liberation Tigers of Tamil Eelam (LTTE). They eventually killed its megalomaniac leader, Velupillai Prabhakaran, whose guerrilla tactics included recruiting child soldiers and suicide bombers.

A mere three years later, Subramanian, who writes for The New Yorker, the Wall Street Journal and the like, travelled throughout the island nation with an ambitious task: to document what the “conflict had done to the country’s soul.” In This Divided Island, he is stunned to find a place “pretending that it had been suddenly scrubbed clean of violence.” It must have surprised no one there when the UN released a report this fall declaring “egregious violations” took place on both sides of the conflict. Its main recommendation is the creation of a war crimes tribunal.

Sri Lanka was a post-colonial tragedy in-the-making, the result of a British imperial policy to pit the minority Tamils against the majority Sinhalese, a historical detail that, since independence in 1948, has left an island riven by racial and religious supremacist politics. The tipping point was anti-Tamil riots in 1983 that left 150,000 Tamils homeless—individuals were “necklaced” with tires and set afire—and would activate the cause of the Tigers for a separate state in the north.

Subramanian profiles those who participated in armed struggle and those who experienced the war’s atrocities, such as a Buddhist monk-turned-extremist, and Prabhakaran’s early comrades who came to mistrust a leader who had opponents murdered. As in Philip Gourevitch’s 1998 classic about the Rwandan genocide, We Wish to Inform You That Tomorrow We Will Be Killed With Our Families, the stories are harrowing. Listening to a father narrate the killing of his family by the Hindu Tigers because they were Muslim, Subramanian writes: “I felt like a man who had picked at a loose floor tile and found a stash of corpses buried beneath.”

Subramanian does not end This Divided Island with any prescriptions. “Sri Lanka has forgotten any other way to live,” is his conclusion. The international war crimes tribunal will come none too soon.