Students get 'Lit Up' for literature, not screens 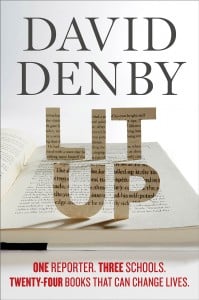 More than 20 years ago, Denby, a writer for The New Yorker, returned to Columbia University decades after he had graduated, to experience life again as a freshman English student re-reading a selection of Western classics. The result was his 1996 bestseller Great Books. In this prequel of sorts, he investigates how a group of English teachers in New York City and nearby New Haven, Conn., achieve the near impossible: convince their students to appreciate books, rather than stare at screens all day.

A staunch believer in the idea that reading remains an essential component of character-building, he focuses on the initial apathy of the teens, who see little value in reading long and difficult works of literature. “Books smell like old people,” a student remarks. Still, the central characters of Lit Up are not the students, but their devoted teachers.

Much of the action takes place in the Grade 10 English class of Sean Leon, at the Beacon School, a magnet college-prep school in the heart of New York. Described as a “dynamo,” Leon leads his unusually inquisitive students— he rarely has to tell them to pay attention—on a journey incorporating the writings of Huxley, Orwell, Hesse, Vonnegut and Dostoyevsky. He guides his charges to think hard about the books, and the complex questions they raise about the human condition. And he succeeds brilliantly. An even greater challenge is faced by Jessica Zelenski, whose classes Denby sits in on at Hillhouse High School in an impoverished and tough area of New Haven, who is troubleshooter, problem solver, family counsellor, and disciplinarian to her kids. At the beginning of the year, most of her Grade 10 students refuse to read; by May, they are asking for more reading time.

Leon and Zelenksi and the others featured in Lit Up seem like magicians. But as Denby discovered, their success comes down to one simple fact of pedagogy: “Fifteen-year olds will read seriously when inspired by charismatic teachers alert to what moves adolescents.”