A novel of loss and surprising resilience 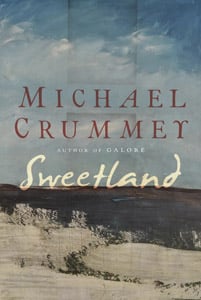 For a writer who always explores the same theme—loss, both accidental and inevitable, coupled with a resilience that surprises the characters themselves—Michael Crummey never repeats himself. In his superb fourth novel, the death of the commercial fishery means the end of the line for residents who have lived for generations on Sweetland Island off Newfoundland’s south coast. They are offered a substantial government compensation package—up to $150,000 a family—to leave, but the offer is contingent on them all going. And 69-year-old Moses Sweetland, whose ancestors gave their name to the island, refuses, despite an increasingly violent campaign among the other islanders to induce him. After his brother-in-law finds an argument that plays on Sweetland’s sense of responsibility, Moses does sign on. Then chance intervenes—as it frequently does in Sweetland’s life—and he concocts a plan to secretly remain after all the others depart, a scheme that requires all of his cunning resourcefulness.

Crummey’s novels have covered a wide range of Newfoundland history, from the extinction of the Beothuks two centuries ago to Sweetland’s present day. (Moses may skin rabbits in his kitchen sink, but he also owns an artificial Christmas tree and a laptop he uses for online poker—although, in a novel that’s often very funny, he is assumed to be watching porn.) But history is never Crummey’s point: his protagonists are not Newfoundland personified, even if island and man bear the same name here. Sweetland’s desperate struggle to keep what was from vanishing is deeply personal, rooted in pride, regret and duty: if the past disappears, so does his chance to right old wrongs, a motivation he barely recognizes in himself. What ties Moses to the old place is kith and kin—the islanders with whom his life has been so entwined that the distinction of friend from enemy is meaningless.

Impetuous and imperious, Moses Sweetland is an extraordinary, beautifully realized character, and the supporting cast—including Queenie Coffin, a chain-smoking romance-novel addict who hasn’t left her house in four decades; and the feral Priddle brothers, “Irish twins” born 10 months apart—are scarcely less so. But Sweetland, Crummey’s finest novel yet, reaches its mythic and mesmerizing heights only after the others depart, leaving Moses—a Newfoundland Robinson Crusoe who even encounters a Friday-like dog—alone on his eponymous island, bracing for a bitter winter both seasonal and personal.