Book review: Thank You for Your Service 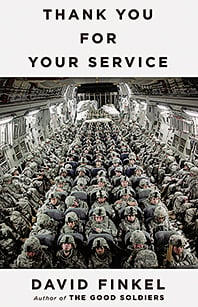 Thank You for Your Service

This is a story of American soldiers after the bullets, fighting their “after-war” back home. Finkel has written an exquisite piece of journalism: he got to know his subjects well enough to plausibly inhabit them, which makes the scenes in which soldiers put shaky guns to their own heads particularly heartbreaking.

Finkel follows a handful of soldiers who return from Iraq and Afghanistan with post-traumatic stress disorders or traumatic brain injuries, a few among the hundreds of thousands of veterans who are suffering without visible scars. The main character, Adam Schumann, was a model officer and certifiable hero who required an unceremonious mental health evacuation from Iraq. His wife says of him: “He’s still a good guy. He’s just a broken good guy.” Soldiers who endured war by relying on camaraderie face “the truth of the after-war . . . that you’re on your own.” We learn about the military’s efforts to care for their wounded warriors. Shame abounds and stigma remains. The top brass seem sincere but relatively clueless. Soldier suicides now exceed combat deaths, which leaves lurching generals desperate for lessons learned.

Finkel widens his lens beyond soldiers, particularly to examine the ripple effects of their mental illnesses on their families. A soldier’s trauma becomes his wife’s, and their children reap some of what was sown half a world away on a battlefield. The patience and support of loved ones prove necessary but not infinite. This is a book more about struggle than happy endings. It is unflinching, remarkable and guaranteed to further infuriate anyone who has lamented George W. Bush’s decision to invade Iraq. That war, Finkel makes clear, will haunt its veterans and their families for lifetimes to come. The government that sent them so confidently abroad doesn’t know how to make them feel safe at home.