Review: The Blood of Free Men: The Liberation of Paris, 1944 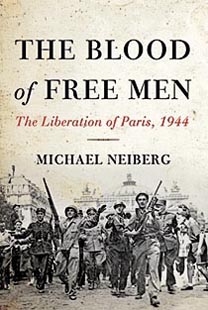 While Hitler’s Germany laid waste to much of Europe during his short but murderous reign, the Continent’s two most celebrated and historic cities—Paris and Rome—were spared destruction. Could it be that even the Nazis understood the irreplaceable nature of these world treasures?

Historian Neiberg takes a new look at the liberation of Paris and how it narrowly escaped devastation. It’s a story that’s been told many times before, perhaps most memorably by Larry Collins and Dominique Lapierre in their 1965 book Is Paris Burning? and then given star-laden treatment (Kirk Douglas, Orson Welles, Charles Boyer, Leslie Caron, Alain Delon, Jean-Paul Belmondo, Glenn Ford, Gert Froebe, Anthony Perkins) in a sprawling movie of the same name a year later. That title, of course, refers to an order given by Adolf Hitler but ignored by his retreating army to lay waste to the City of Light.

An equally impressive cast of real-life characters populates this retelling of Paris’s deliverance, ranging from future world leaders Dwight Eisenhower and Charles de Gaulle to writers Albert Camus, Simone de Beauvoir and Jean-Paul Sartre to the brave rank and file of the French Resistance. And yet the most fascinating and controversial figure remains German Gen. Dietrich von Choltitz, the man who left Paris unburnt. Collins and Lapierre based much of their work on Choltitz’s own memoirs, which suggest he saved Paris for moral reasons.

Neiberg reconsiders the evidence and comes to a different conclusion: Choltitz spared Paris because he lacked the means to do otherwise. The general’s nickname on arrival in Paris was “smasher of cities,” a moniker earned for his treatment of Rotterdam and Sevastopol earlier in the war. So there’s no reason to believe he felt any unease over destroying great landmarks. Rather, says Neiberg, Choltitz underestimated popular support for the Resistance and was left powerless once Parisians took to the streets ahead of Allied forces. In the end, the German general surrendered to save his men from the wrath of a wild mob. As for the famous question of whether the city was burning or not, Neiberg says “There is no evidence those words ever left Hitler’s mouth.”