Nixon, Kissinger, and a Forgotten Genocide 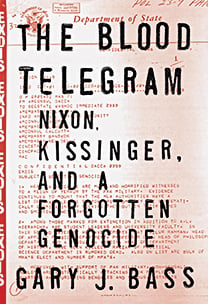 The Blood Telegram: Nixon, Kissinger, And A Forgotten Genocide

We begin on the evening of March 25, 1971, in Dacca (now Dhaka) in East Pakistan (now Bangladesh). United States consul general Archer Blood spends the night on his rooftop, watching the Pakistan army begin its ruthless crackdown on Bengalis. Blood peers down at the carnage, with the dreadful knowledge that his own government is supporting the slaughter.

The Blood Telegram, by Princeton University professor Gary Bass, promises to be “the first full account” of the role of former U.S. president Richard Nixon and national security adviser Henry Kissinger in the 1971 atrocities in Bangladesh—which led to a wrenching war between India and Pakistan. It presents a slice of Cold War history that is remembered well on the subcontinent (after all, the conflict was bloodier than Bosnia) but is largely forgotten in America.

The title comes from Archer Blood and the many telegrams he sent to State Department officials during Pakistan’s gory campaign: telegraphs that were brusquely cast aside by a White House keen to stay chummy with Pakistan’s military dictator, against a democratic India that Nixon abhorred. (“I want to piss on them,” Nixon would later say, of India’s leadership.) Nixon’s support for Pakistan—fuelled by a brew of realpolitik, paranoia and presidential caprice—would take many forms, including illegal weapons shipments.

As conflict escalated, Blood’s telegrams changed: from methodical dispatches cloaked in diplomat speak to desperate pleas for aid and charges of “genocide”—culminating in the U.S. Foreign Service’s first-ever formal dissent cable, sent by the staff of the Dacca consulate and accusing America of “moral bankruptcy.”

Bass’s history relies on newly released documents and interviews with retired government officials. But Bass warns us that his account is far from complete. “The Whitehouse staff routinely sanitized their records,” he writes. “Even now, mildewed and bogus claims of national security” keep critical documents hidden from sight.