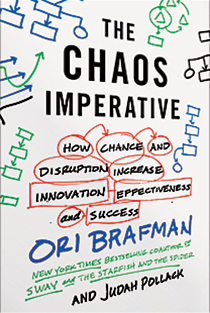 The Chaos Imperative: How Chance And Disruption Increase Innovation, Effectiveness And Success

By Ori Brafman and Judah Pollack

Contained chaos and planned serendipity are two self-contradictory concepts that organizations may need to adopt to thrive in the hypercompetitive marketplace. Oxymorons or not, the U.S. Army hired co-author Ori Brafman, a Stanford M.B.A. in organizational studies, to introduce chaos theory into its hierarchical chain of command. Just like creative artists, the military and knowledge workers need “white space” if they are to overcome impasses in their jobs. Loafers take note: The difference between the brain energy needed to focus intently on a vexing mental task and the amount used in daydreaming is less than five per cent. Taking time out from business to work out in a gym may be as useful to your career as to your health; downtime frees our unconscious minds to synthesize and consolidate inputs from the more structured part of the workaday world. In what may be an apocryphal tale, Brafman and Pollack suggest the key insight that led to Google Adwords occurred when two engineers were shooting pool in the Google offices. Similarly, in the literary world, while staring out a train window, J.K. Rowling came up with the idea of a young boy attending a school of wizardry.

Those who hire or recruit will find the author’s take on “unusual suspects” worth considering: It’s natural to be drawn to those who are similar to ourselves, but if you need to create “out of the box” solutions to business problems, teams formed from workers of varied backgrounds and interests are more likely to come up with the new perspective you may desperately need. In short, while this genre of business book has a tendency to be dull, this particular tome is an enjoyable exception.