The collapse of the Habsburg Empire: A state led by idiots

Review of A Mad Catastrophe 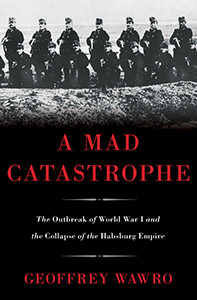 Review of: A MAD CATASTROPHE: THE OUTBREAK OF WORLD WAR I AND THE COLLAPSE OF THE HABSBURG EMPIRE

For Canadians, the First World War was understandably all about the Western Front, where our ancestors fought and died. But as the adjective “Western” indicates, there was another major theatre to the conflict, and the Eastern Front was no sideshow. American historian Wawro writes about the Austro-Hungarian Empire’s role in the start and unfolding of the Great War with verve, inescapable black humour and a certain note of there-but-for-the-grace-of-God. The regiment into which his grandfather had been conscripted was decimated in the war’s first weeks, as was his grandmother’s village, swept by epidemics, but the couple had pulled up stakes in the nick of time, arriving at Ellis Island in 1913. There is anger too in Wawro’s account, as he questions how the ramshackle Habsburg regime—rather like the way its rump Austrian successor state, which rapturously welcomed union with Hitler’s Germany, managed to present itself as the Nazis’ first victim—has somehow left a vaguely favourable impression among its former enemies.

Beneath the Ruritanian facade presented by the doddering old emperor, Franz Joseph, and the glittering modernist Vienna of Sigmund Freud and Gustav Klimt, was a tottering state riven by seething ethnic resentment in an age of nationalism. The devolution, in 1867, into a dual Austro-Hungarian state merely empowered another of the empire’s peoples to join the Germans of Austria in suppressing all the others, while giving Budapest near-veto power over the few modernizing initiatives to arise in Vienna. By 1905 the empire was in worse shape, in military terms, than even the decayed Russia of the Romanovs, and Franz Joseph was actually drawing up secret plans to invade Hungary, the “internal enemy.” (It sounds even more preposterous in German: der innere Fiend.) But nothing came of it, and Habsburg military spending, blocked by (justifiable) Hungarian suspicions, was less than half of any other great power. Its shortage of modern artillery, the new rulers of the battlefield, was particularly acute.

This state was led, as Wawro convincingly shows, by idiots. The empire that couldn’t fight dearly wanted war, an imaginary cleansing romp that would unite the peoples and bolster the dynasty. When the chance arose with the assassination of archduke Franz Ferdinand, heir to the throne, the Habsburgs—most of whose high officials went on vacation for the month between the assassination and the guns of August—marched right into it. Those officials returned to fight their war with grotesque incompetence, destroying the last vestiges of internal loyalty, and requiring rescue by their German ally. The diversion of German resources had crucial effects on the Western Front. The war turned from one of movement to meat-grinder stalemate. When it was over, the Habsburg and their empire were gone.