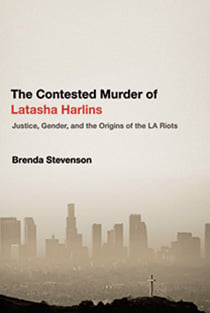 The Contested Murder Of Latasha Harlins: Justice, Gender, And The Origins Of The L.A. Riots

Everyone knows what sparked the six-day Los Angeles riots of 1992, which saw 53 die in one of the worst outbreaks of racial violence in recent American history: the acquittal of four city police officers in the savage beating of Rodney King. The high percentage of Korean-owned shops among damaged businesses, and the striking TV footage of running gun battles between Korean shop owners and looters, is seen primarily as a result of the Koreans being on the spot—a group of entrepreneurial immigrants who had opened stores where white businesses had feared to go.

Not so fast, argues UCLA historian Stevenson. The King decision landed in a community already simmering with a particular variety of racial tension. Thirteen months before the riots (13 days after King’s videotaped beating), Latasha Harlins, a 15-year-old local black schoolgirl, walked into a South Central Los Angeles convenience/liquor store and put a bottle of orange juice in her backpack, then approached the cash register with two dollar bills in her hand. After a fast-paced series of events, again caught on video, Harlins was dead on the floor, a bullet in the back of her head from a gun fired by the woman behind the counter, Soon Ja Du. In November 1991, Du was found guilty of manslaughter, which could have brought her years in prison. But Judge Joyce Karlin, declaring that Du’s “inappropriate” actions were “understandable,” sentenced her to five years of probation.

As Stevenson points out in her nuanced account of three women from three strands of America’s volatile melting pot (Karlin is Jewish), the anger inspired by Harlins’s death and Du’s light sentence was kept alive for months by attempts to get Karlin off the bench and by the prosecution’s appeal. The decision, by a higher court, to uphold the sentence came down only eight days before the acquittal of the officers who beat King. L.A. was already a tinderbox when that happened, with a seething black underclass focused on what it saw as a new racial oppressor.