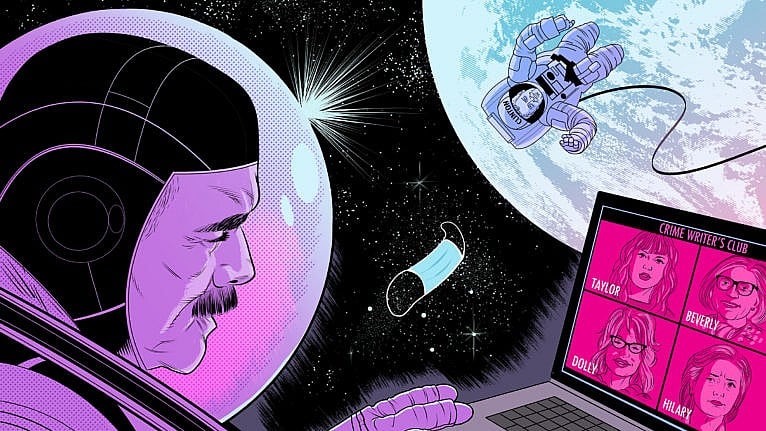 A former chief justice of the Supreme Court of Canada, a former U.S. secretary of state, a former commander of the International Space Station, even a 75-year-old country music queen—fall 2021 is a season for newly released or announced crime novels by people famous in other fields.

And Hillary’s husband was no trailblazer, either in writing in general or in choice of genre. Crime stories and the famous have a long history, partly because high-level insiders possess a keen insight into their profession’s fault lines, and partly because few characters in popular literature are as iconic as the great detectives—Sherlock Holmes still gets mail at 221B Baker St. in London.

READ: Our ancient ancestors may have been more civilized than we are

Meanwhile, there’s a whole subgenre of professional authors’ stories featuring actual celebs, from Taylor Swift to Eleanor Roosevelt, as their amateur sleuths. So, why shouldn’t some amateur writers inject themselves—in the form of, say, a guitar-playing Chris-Hadfield-like space troubleshooter in The Apollo Murders—into their thrillers? All in all, enough prominent-in-another-field novices have tried their hands at fiction to keep a certain urban legend, referenced more than once by an exasperated Margaret Atwood, alive for decades: a brain surgeon meets an author and declares he’s going to turn to writing after retirement. “Really?” responds the novelist. “I thought I’d take up brain surgery.”

Besides genre and quality—in the novels already available for review, the plotting is impressive indeed and the writing pretty good—what unsurprisingly links this year’s crop is COVID-19. The authors are all people who wouldn’t have risen to the heights they did if they weren’t the next thing to workaholics, and even their post-retirement lives have involved considerable travel. Asked in interviews about the genesis of their novels, McLachlin, Hadfield and Penny all included the global lockdown. They were grounded, usually in a cottage, and began thinking, as McLachlin puts it, “Gee, I should get something done.”

What she got done is an absorbing exploration, in the form of a story surrounding a woman charged with her mother’s mercy killing, of “an issue that I as a judge and as a person had lived through during the ongoing drama about medical assistance in dying.” McLachlin opted for her fictional approach because, in part, she’s tired of judging and acutely aware of its limitations. “As a judge, you have to withhold your final moral judgment, but you need an answer of some kind. When you’re writing fiction, you don’t have to get to an answer, you can just throw out a lot of things for people to think about.”

MORE: Bingeing into the 21st century with artist Douglas Coupland

Penny and Clinton, who have known each other for years, wanted to do something new for both of them. With “both of us in bed in our flannel pyjamas” during late-night Zoom calls, says Penny, they crafted a political thriller involving Middle Eastern nuclear politics, a rising terrorist organization and a clueless U.S. government. Plus, “very strong women characters,” she adds, calling State of Terror “a buddy story of two late middle-aged women in a catastrophic situation.”

Like the two buddies, Hadfield wanted to see what he could do fictionally, once he had the pandemic-imposed time for it. And like McLachlin and Clinton, he had a career’s worth of experience to pour into it. “What people who fly in space do for a living,” says Hadfield, “is think about how things are going to go wrong and getting ready for them.” That includes, in no small part due to Hadfield, what to do with a corpse. “I pushed really hard when I was commanding the space station, regularly saying that stuff happens and eventually someone’s going to die up there. So what do we do? The answer we came up with was, okay, well, we’ll just use a spacesuit, because they’re airtight.”

That explains the amount of briskly delivered literal rocket science in The Apollo Murders, but what about the grittier details, many of them centred on bodily fluids? “Listen, I’ve spoken to a thousand schools, UN meetings, heads of state—they all want to know how you go to the bathroom in space. And people have thrown up inside their spacesuits,” meaning “airtight” isn’t an entirely positive quality sometimes. Subtlety may not be Hadfield’s strength, but his grasp of detail and his highly charged setting—the intense U.S.-U.S.S.R.lunar rivalry of the early 1970s—make for a very entertaining thriller, one that easily could have been titled Psychopaths in Space.

Maybe some brain surgeons can write after all.

This article appears in print in the November 2021 issue of Maclean’s magazine with the headline, “Mysterious reincarnations.” Subscribe to the monthly print magazine here.