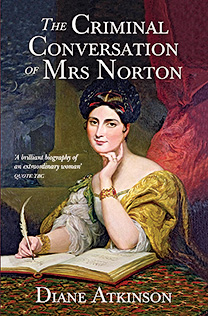 The Criminal Conversation of Mrs. Norton

Today, we call it cheating or running around. Back in 19th-century England, it was called “criminal conversation”—or “crim con” to the tabloid industry that covered these public trials where husbands sued their wives for adultery. The women were not allowed to countersue or defend themselves in court, since they didn’t exist as separate legal entities from their husbands. This sexist hypocrisy is at the heart of this book, which is illuminated by its flamboyant subtitle: Victorian England’s “Scandal of the Century” and the Fallen Socialite Who Changed Women’s Lives Forever.

The socialite in question is the beautiful Caroline Sheridan Norton. (We know she was beautiful, because the first 100 pages of the book detail her admirers’ comments and the privileges she enjoyed because of her looks.) Her life went off the rails when she was married off to a boring old lawyer, George Norton. He resented her celebrated talent as a poet and her flirtatious ways. When he accused her of having criminal conversation with Prime Minister William Melbourne and refused to let Caroline see their three boys, she waged war against the legal system. Her custody battle was the most vicious, protracted and public slugfest imaginable, but Caroline won, eventually. Along the way, we meet Edward “Old Bear” Ellice, a baron of the Canadian fur trade and one of Caroline’s many powerful advisers. Although Caroline denied being a feminist, she lobbied and wrote persuasive pamphlets that helped create the game-changing Infant Custody Act (1839), the Matrimonial Causes Act (1857) and the Married Women’s Property Act (1870).

Atkinson nearly capsizes her book with the sheer number of excerpts from Caroline’s letters. The poisonous exchanges with George soon become tiresome. However, Caroline’s conviction that the law had to be changed to protect women is so admirable that this female reader felt honour-bound not to skip a single word. As the author says in the closing paragraph, “Every time a mother is granted custody of her children . . . [Caroline Norton] should be saluted.”