The death and rebirth of The Great Gatsby

Book review: So We Read On: How The Great Gatsy Came to Be and Why It Endures 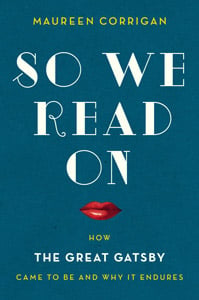 SO WE READ ON: HOW THE GREAT GATSBY CAME TO BE AND WHY IT ENDURES

Don’t worry. Maureen Corrigan didn’t like The Great Gatsby when she read it in high school either. It’s the first thing she lets us know in her book about Fitzgerald’s masterpiece, where Corrigan makes an enthusiastic case for Gatsby as the Great American Novel.

The author has been teaching Gatsby for years, has read it over 50 times and is amazed she always uncovers something new. Readers will be amazed too, not just that so much detail can be extracted from such a slim volume, but that at nearly every page they are tempted to throw Corrigan’s book down and return to their dusty paperback copy.

Corrigan reminds us Gatsby is the only candidate for the Great American Novel to deal with class and money (surprisingly after 2008, still taboo subjects), as opposed to race (To Kill a Mockingbird, The Adventures of Huckleberry Finn) or vast physical geography (Moby Dick, On the Road). She then dives headfirst into the world of Gatsby and his creator, going everywhere from Princeton’s Fitzgerald archives to a tipsy boat tour off Long Island Sound, where the Tom Buchanans have given way to Bill O’Reilly and the rumoured presence of Adam Sandler’s parents. She leads us from an astounding low (Asheville, N.C., in 1936, where a debt- and self-doubt-ridden Fitzgerald is trying to dry out while his wife is hospitalized with schizophrenia) into the remote past (Fitzgerald’s class-conscious upbringing in Minnesota) and through the golden years (New York in the Jazz Age, the French Riviera, the completion of Gatsby). Corrigan does a wonderful job following both the book and Fitzgerald into obscurity, doing some literary sleuthing to uncover how the book went from neglect to required reading to branded jewellery for Tiffany and Co., and back to neglect—we are led to Princeton’s ivory towers, where the novel is non-existent in literature classes.

The book’s strength lies in the way Corrigan reads Gatsby in numerous contexts. Her reading of Gatsby as proto-noir—underworld figures, femme fatales, fast cars—is invigorating. Her excavation of Gatsby’s water symbols takes the story to new depths. A trip to her old high school finds her sitting with students reading the novel. Corrigan is surprised that a group she considered ill-fit for Gatsby is able to offer her new readings of this masterpiece. Her journey into the past, like Gatsby’s own, is uncanny—the ethnic makeup of her school in Long Island City has changed, the kids are freer, the teachers more colloquial. But Gatsby still resonates, asking questions about American life that it refuses to answer, questions that these new readers will carry with them as they wade into the 21st century and try not to be swept away.