'Austria declared war on us. Bastards.'

A review of 'The Diary of Olga Romanov: Royal Witness to the Russian Revolution' 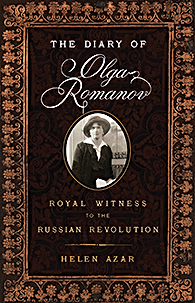 The Diary of Olga Romanov: Royal Witness to the Russian Revolution

The entire Russian imperial family were keen photographers and diary keepers, it turns out, though most of their journals no longer exist. It’s believed that family members, including Anastasia and her father, Czar Nicholas II, destroyed their own journals, perhaps during the year in which they were held captive under house arrest before the family’s mass execution.

Yet somehow those of the eldest daughter, Olga, survived almost entirely intact. Ten of Olga’s diaries, custom-made books with silk bindings, have been kept under strict supervision in Russian archives, never before translated into English until now.

In a historical first, the American librarian and scientist Helen Azar has translated the diaries, collating select passages and interspersing them with letters and memoir excerpts to give us a never-before-seen picture of the young grand duchess, great-granddaughter of Queen Victoria and dear friend of Rasputin’s.

Of the royal siblings, Olga was the most intelligent and studious, according to Azar, which may explain her frequent impatience with her younger sisters’ piano playing. April 17, 1915, she writes: “Tatiana is playing Fibich for our listening pleasure—which is very boring.” In May, it’s: “Marie is playing Izhe Kheruvymi on the piano and hitting a lot of wrong notes.”

Olga’s first diary entry was made on Jan. 1, 1905, and the last on March 15, 1917, a date that coincides with her father’s forced abdication. In 1914, she writes that “the German swine have declared war on us,” and a week later, “Austria declared war on us. Bastards.”

Emotions intensify the year she volunteers as a nurse, assisting at surgeries and changing the dressings of wounded soldiers. A picture of an independent woman emerges when she makes it clear she intends to marry for love, spurning her parents’ romantic choice, a Romanian prince, for a wounded soldier at the infirmary.

In her diaries, she uses the code “S” to refer to her love interest, a young ensign by the name of Dimitri Shakh-Bagov. Olga’s friend and fellow nurse, Valentina Chebotareva, writes in her memoir that when “S” was discharged, “[Olga] the poor thing sat alone for an hour, with her nose in the sewing machine, and sewed persistently and determinedly.” When a letter arrived from “S,” Olga jumped around, asking, “Can someone have a stroke at 20 years old? I think I’m having a stroke!”

On Monday, Dec. 19, 1916, grim news is recorded. “Found out for certain that Father Grigori [Rasputin] was murdered, most likely by Dimitri [Pavlovich, Olga’s father’s cousin] and thrown from a bridge. They found him in the water. It’s so terrible, should not even write.”

In her last known letter written under house arrest, Olga describes how her brother, the hemophiliac heir, was put to work by the guards and forced to dig a tunnel in the snow and how she and her sisters had grown so scruffy they looked like ruffians.

Olga died unmarried at age 22, murdered on July 16, 1918, along with her four siblings and parents at the hands of revolutionaries in the basement of “the House of Special Purposes” in Siberia.