REVIEW: The Dictator’s Learning Curve: Inside the Global Battle for Democracy 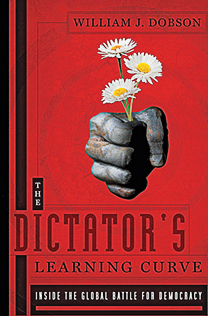 Democracy has made tremendous global advances in the past four decades. Beginning in 1974, dictatorships and military juntas fell across southern Europe, East Asia and Latin America. Then the Soviet bloc collapsed and democracy rolled through Eastern Europe. In 1974, there were 41 democracies in the world; by 1991 there were 76.

But the world’s most unsavoury regimes made a comeback. By 2010, the number of democracies dropped to its lowest point since 1995. What happened, writes Dobson, is that dictatorships became more agile. They learned to adapt. Few authoritarian regimes anymore resemble the stupid, lumbering dinosaurs of old. North Korea, run like an evil villain’s kingdom in a particularly grim children’s fairytale, is the exception that proves the rule.

Instead, in Venezuela, President Hugo Chávez does not ban elections but stacks them in his favour. Not all his political opponents are jailed. But anyone who signs a petition calling for a referendum on recalling the president risks losing her public sector job. The Chinese can get rich and travel abroad. But they still can’t say what they want. China’s repression, writes Dobson, is no less brutal: “it is simply more calculated and discreet.”

But if tyrannies can learn, so can the democrats struggling to bring them down. Dobson met scores of them, from Russia to Malaysia and beyond. Many collaborate with each other. Serbs who toppled Slobodan Milosevic share lessons with Middle Eastern youth hoping to overthrow their own rulers.

There is no magic formula. But there are common tactics, many of them learned from Gene Sharp, a pioneering professor of non-violent resistance. A refusal to use violence is perhaps most important. Doing so means confronting a dictatorship on its own terms. As one Venezuelan student leader told Dobson, you can’t out-box Mike Tyson, but you might be able to beat him at chess.

Dobson was in the midst of his research when the uprisings of the Arab Spring exploded. It gave him hope about democracy’s prospects. Despite all the government propaganda to the contrary, those who rose up across the Middle East were not foreign agents but patriots. “In the end, the people actually mattered,” he writes. “For a dictator, there is nothing more terrifying.”