The extraordinary meta-fiction of Indra Das

The Devourers is a book of compellingly written stories within stories 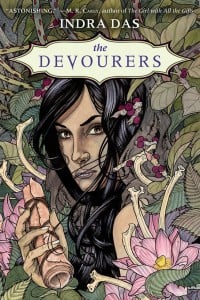 THE DEVOURERS
Indra Das
A Viking, an Ancient Greek and a medieval Frenchman, immortal, human-hunting shape-shifters all, walk into a bar . . . Actually they walk into India’s Mughal Empire in the days of its glory, when Shah Jahan, who ruled it from 1628 to 1658, was building the Taj Mahal as a tomb for his favourite wife. But Das, who splits his time between Vancouver and Calcutta, knows his debut novel lends itself to such formulations—one of his many narrators views one encounter he has as “a half-werewolf, a mummy and a human meet at a museum.”

There is much more, though, to this extraordinary piece of meta-fiction: stories within stories; an intense physicality, compellingly written, that particularly wallows in scent; and, underneath the reeking gore, twin meditations on the futility of human yearning and the inherent injustice of power structures, both colonial and gender. It’s no accident the apex predators arrive from the north just as Europeans are starting to tighten their grip on the subcontinent.

The three white werewolves (only a loose approximation of their true selves) and the weretigers—this is India, after all—who eventually show up are not the only fluid, shape-shifting characters in the novel. Even the ordinary humans have no fixed identities. The story opens with lonely historian Alok Mukherjee being approached by a young man who wants to share a secret—he’s a half-werewolf. “Disarmed by his androgynous beauty,” and by his own barely admitted desires, Alok listens. (Like all shape-shifters, the “youth”—he’s more than 250 years old—guards his own name; much later he tells Alok to call him Izrail, one of the many names borne by the Angel of Death.) Izrail hands over two 17th-century scrolls written on human skin, one composed by the Viking Fenrir, the devourer of humans fascinated by human love, and one by Cyrrah, whom he rapes in order to create a child.

Beyond the tension involved in wondering if Alok will end up as food rather than lover, The Devourers—trans-genre, transgender and transgressive—turns on the violent triangle formed between Fenrir, Cyrah and the French werewolf, Gévaudan, who loves Fenrir. Who gets what he or she wants and, above all, who has the moral right to their desires, is the heart of this remarkable, multi-layered novel.