How many consultants does it take to tell time?

Book review: The Firm: The Story of McKinsey & Co. and its Secret Influence on American Business 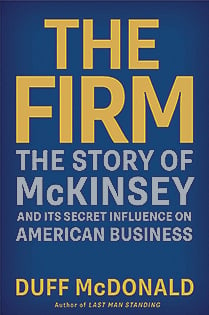 The Firm: The Story Of McKinsey And Its Secret Influence On American Business

Everyone knows how many clowns it takes to screw in a light bulb. But how many consultants does it take to tell time? That depends on who you hire. Veteran business journalist McDonald takes a close look at the role and reputation of McKinsey & Co., often considered the elite of management consultants. To explain how McKinsey sets itself apart, he offers an insider’s anecdote comparing the firm and its competitors. “Let’s say a client asks us what time it is,” a partner explains. “If you ask Booz Allen, their response will be, ‘What time do you want it to be?’ If you ask A.D. Little . . . they will tell you that ‘it’s 9:45:20 Greenwich Mean Time.’ But if you ask McKinsey, we will say, ‘Why do you want to know?’ ”

McKinsey claims to be the most far-sighted of consultants, hiring overachievers who strive to understand the broader framework of what makes firms successful. Founder James O. McKinsey and his successor Marvin Bower largely invented the field of corporate strategic planning in the 1920s and 1930s; ever since then, McKinsey has positioned itself at the top of the management food chain. “The military has the Marines; the Catholic Church has the Jesuits. Consulting,” writes McDonald, “has McKinsey.”

And yet despite its reputation for intellectual prowess, McDonald makes it plain the firm has a long and often spotted record of applying identical solutions across whole industries depending on the corporate flavour of the month: conglomerates, downsizing, corporate re-engineering, leveraged buyouts et cetera.

The real secret behind McKinsey’s success, beyond its carefully crafted image, is the fact that it’s already consulted for most corporations of note worldwide, across many industries. It can thus tell executives exactly how their competitors are doing. The firm’s proprietary Organizational Health Index, for example, allows companies to benchmark their own performance against a massive database of McKinsey’s 600 clients worldwide—on a confidential basis, of course.

Consultants are often painted as corporate outsiders hired to do a firm’s dirty work. McKinsey goes a step farther—it’s an outsider that also happens to be an insider everywhere else.