Book review: The Good Nurse: A True Story Of Medicine, Madness, And Murder 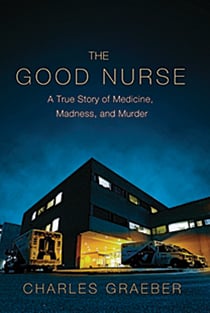 The Good Nurse: A True Story Of Medicine, Madness, And Murder

It is every patient’s nightmare: You’re lying in a hospital bed at night, hooked up to an IV but looking forward to going home in a few days, when a nurse slips into the room. Someone you don’t recognize. But so many strangers come and go in a busy hospital, you don’t question this. She hooks up a new IV bag and leaves. And by morning you’re dead from an overdose of the heart drug digoxin.

This was how easy it was for Charles Cullen to kill as many as 300 patients in the course of his 16-year career as a well-regarded male nurse—a feat that makes him eligible as the worst serial killer on record. Despite a history of suicide attempts and a habit of over-ordering potentially toxic drugs while on duty, Cullen had no problem finding work in one hospital after another. (“Charles is always positive and polite! An excellent patient advocate!” wrote one supervisor in her report on him.) But despite being dubbed the “Angel of Death” by the media when he was arrested in 2003, the murders were far from mercy killings. Cullen, the product of an unhappy but unextraordinary childhood, seemed to choose his victims at random. That is what makes this brilliantly researched portrait so chilling.

But the story takes a Shakespearean twist that adds complexity. Cullen’s case was taken up by a pair of hard-boiled Brooklyn detectives, straight out of an Elmore Leonard novel. After digging up new evidence, they enlisted Cullen’s best friend, another nurse, to lure him into a secretly recorded confession. The author turns the tape of this conversation into a riveting chapter of rescue and betrayal. All three—the convicted killer, now in prison, the author, and the whistle-blowing nurse—recently appeared together on the Katie Couric show, to talk about how someone in the modern hospital system could get away with murder for so long.