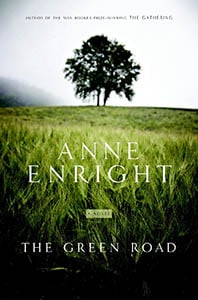 Spanning 25 years, from 1980 to 2005, Enright’s fantastic new novel offers a portrait of one family, the Madigans, who live in the Western part of Ireland. The book starts when the Madigan children—Dan, Emmet, Constance, and Hanna—are young and searching for slivers of the shapes of their future lives. The book progresses and as the children become adults they are tenuously linked through their connection to their parents, but mostly Rosaleen, their aging, anxious mother.

Through chapters written from each character’s perspective, Enright offers glimpses into the cultural context of Ireland (and its 1990s economic boom), as well as the country’s connection to the broader world. Dan winds up exploring his sexuality in New York in the early ’90s, when HIV panic was acute; Hanna leaves for Dublin and life as a middling actress; Emmet moves to Mali for relief work; and Constance is the dutiful daughter who marries, has kids, and stays close to her birthplace. The isolated narratives come together when all of the Madigans come home for Christmas in 2005, and it’s at this point that the family’s fractured but loving relationships come into full view.

Enright rose to fame when her novel The Gathering won the Booker prize in 2007. But where The Gathering’s prose is purposefully alienating and the narrative style disjointed—the revelation of that book’s central problem isn’t offered until halfway through—The Green Road constructs its story steadily and the narrative seems more complete as a result. Enright’s writing here is particularly polished, and very affecting—she evokes deep emotion with scenarios that build to individual, compelling passages. For example, when one of Dan’s friends is dying of AIDS in New York, we read about the friend’s mother finally visiting her son and when she does, “He became human again. He became pure. They gazed at each other for three days straight and then he died.” A chapter about Constance and a medical scare becomes much more than just a plot device; rather, it turns into a philosophical study on the body’s unruliness: “a picture of her breast was pinned on to a light-box on the wall . . . and everything around it—the exterior line of the breast, the map of ducts, or veins, perhaps—was very beautiful, like a landscape seen from space.” With The Green Road, Enright masterfully delves into the enigmas of life and love, demonstrating how family shapes the self all along the way.