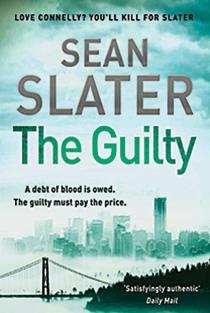 You don’t have to be a cop to write a police procedural: witness former journalist Michael Connelly’s master creation, LAPD Det. Hieronymus “Harry” Bosch. But to find a cop who writes crime fiction without writing like, well, a cop, now that’s a rare and wonderful thing. Expect to hear plenty from Sean Slater, the pseudonym for Sean Sommerville, a Vancouver police officer, who writes what he knows: sketchy neighbourhoods, snitches, gangs, evidence collection, guns, ammo, coffee by the litre—and office politics.

The Guilty is the third outing for his duo of Vancouver homicide detectives Jacob Striker and Felicia Santos in a series that is gaining international attention for the slam-bam pace of Slater’s prose and edgy characterization, and the city’s starring role. Unlike the movie industry, where Vancouver usually plays the backdrop for Anytown, U.S.A., this is unabashedly Vancouver—not the laid-back Lotusland edition, but a grittier, bloodier version that holds its own against Connelly’s Los Angeles.

The Guilty opens with the abduction of a Vancouver doctor and the inexplicable bombing of a local toy shop that vaporizes its owner. As the fire department douses the scene, Striker is cursing the short-sighted failure to screen off the street drains. Fire crews, says Santos, are EDTs—Evidence Destroying Teams. It’s a telling example of the cop-think that lends street cred to Slater’s writing. Add in more bombings, a conflicted, off-duty romance between Striker and Santos and hints of corruption back at the squad room, and Slater delivers an explosive tale moving at lights-and-siren speed.

Mercifully for those who live here, the real Vancouver isn’t always quite this lively. Slater’s first novel in the series, The Survivor, opens with a mass shooting at the high school Striker’s daughter attends. In Slater’s hands, the on-scene description is vivid, graphic and impossible to turn away from—a rare accomplishment for a first-time author.

Sommerville, the real-life cop, has spent years working Vancouver’s tough Downtown Eastside. He used his experiences there, and a flinty-eyed realism leavened with compassion, to make his publishing debut by winning Vancouver’s Province newspaper’s Sunday Serial Thriller contest in 2006. By 2010, he had an agent, a novel and a deal with Simon & Schuster. Now he juggles two jobs: policing and writing. How does the saying go? There are lucky cops, and lazy cops, but there are no lucky lazy cops.