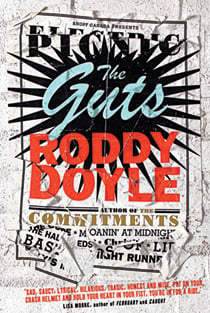 Remember your man Jimmy Rabbitte? The brains behind the best fictional Irish soul cover band of the ’80s, a.k.a. the Commitments? He’s back for an encore in Doyle’s latest novel, happily married with four kids and living comfortably in a middle-class Dublin neighbourhood. He’s come a long way from Barrytown, but he’s still full of beans, still quick to slag your bourgeois taste in music (Supertramp, the Corrs, Michael Bublé . . . all s–te). And he’s still hustling—nowadays, he and the missus, Aoife, promote the long-lost singles of once-beloved local punk bands on the Internet, an enterprise successful enough to protect them from the recession that ensnared the rest of the country through the late aughts.

Jimmy’s doing pretty well, but for one niggly nuisance—he has cancer of the bowel, and he needs to have 80 per cent of his intestines removed, as well as chemotherapy. The disease inadvertently reunites him with two of the Commitments—the gorgeous Imelda Quirk and the hapless Outspan—and more deliberately with his estranged elder brother, Les. At times, Jimmy copes with his fear of mortality rather shoddily, a fact never given its due attention in the story (raising the question: why have a character mess up if he feels negligible guilt and never lands up in trouble?). But he also manages to pull off a brilliant and hilarious scheme involving a raunchy unknown song from 1932 and the fake-Bulgarian band that performs it.

What the book lacks in tension is made up for by Doyle’s sparkling dialogue and Jimmy’s curmudgeonly charm. Egotistic, irritable, sometimes whiny, he is above all a generous soul terrified of losing the people he loves. One of the book’s best moments comes at the break of dawn on a freezing Christmas day, Jimmy out on the street with 11-year-old Brian, laughing and cursing Brian’s gift, a GPS device, which repeatedly gives the wrong directions. “Six in the morning, out with his youngest, disobeying a brand new sat nav. And none of it had been his idea. He breathed deep; he hauled the tears back in. This was his Christmas present.”