Author Greil Marcus hears things no one else hears 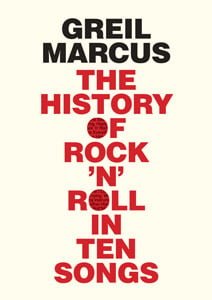 THE HISTORY OF ROCK ’N’ ROLL IN TEN SONGS

Greil Marcus hears things no one else hears. He translates ﬂeeting moments of sound into historical fantasy, extrapolating poetry from what may have been just another day in a recording studio. “Once a song disappears into the ether, it never disappears,” he says, arguing that a song takes on entirely new meaning with the context in which it is heard—and with who decides to cover it decades later, and why.

Tellingly, Marcus quotes D.H. Lawrence: “Never trust the teller, trust the tale.” He does so to downplay one musician’s own version of events in favour of a myth. Yet Marcus himself proves to have suspicious motives: he selectively truncates Lawrence, who actually went on to say: “The proper function of a critic is to save the tale from the artist who created it.” In 10 essays about 10 songs he argues shaped 60 years of rock ’n’ roll, Marcus wants these songs to mean what he wants them to mean, truth be damned.

Marcus displays brilliant reminders of why he’s revered as a critic, alongside embarrassing missteps—like this downright hilarious claim: “Nothing like what happens in [the Flaming Groovies’ 1976 single] Shake Some Action has ever been heard on Earth.” He painstakingly parses every syllable of the doo-wop classic In the Still of the Night. And like most Baby Boomers, Marcus needlessly drags Bob Dylan into every analogy.

Like much of his core audience of old white dudes with vinyl collections, Marcus thinks modern R&B lacks the soul that defined the genre for 60 years. Unlike most of his core audience, Marcus has the critical facilities to articulate why that is, and he does, in a masterful piece that contrasts Beyoncé with Etta James and their versions of All I Could Do Was Cry, weaving all the levels of irony and struggle and technological change into the stories behind each woman. (Guess which one was asked to sing an Etta James song at Obama’s inauguration.)

Marcus nods to Albert Camus, who wrote: “There is always a social explanation for what we see in art. Only it doesn’t explain anything important.” Except, when Marcus is on his game, it most certainly does—as in his essay about Guitar Drag, a record by visual artist Christian Marclay, which is more harrowing and thrilling to read about than it is to listen to (it’s also a cheat; Marclay’s “song,” though released as a single, was created as a work of video art). It may take longer to read Marcus’s dissection of a two-minute pop song than it does to listen to the source material, but it’s often worth it.