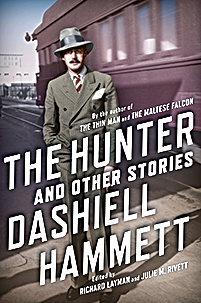 The Hunter And Other Stories

It’s a shock to crack a new collection by Hammett to find they aren’t about cynical detectives, troublesome dames, guns, grifters, thugs, sharpies, angle-players or the occasional justly aggrieved innocent.

Just a few of the largely unpublished collection of 17 short stories and three screenplays involve crime in the conventional sense. So, rather unsettling; as if one picked up a new instalment of Sex and the City, and found it was written by David Gilmour. Hammett, after all, elevated, if he didn’t invent, the hard-boiled American crime genre of the 1920s and ’30s, and created some of its best characters: the Continental OP of his early, blood-soaked novels, Red Harvest and The Dain Curse, Sam Spade of The Maltese Falcon, Nick and Nora Charles of The Thin Man.

The stories, biographer Richard Layman says in the introduction, “are Hammett’s attempts to resist and then to break out of the mould that came to define him as a writer.” These are vignettes about romance gone wrong, ethical dilemmas; some social commentary and a lot of hard luck. As Rivett, Hammett’s granddaughter, says in a commentary, grandpa was often at a loss to explain his next book. “What the hell else is there to say,” he once wrote his daughter, Jo, “except maybe that it’s about people?”

Well, and money. Fame priced him out of the pulp fiction world of the Black Mask crime magazine that had been his bread and butter. When he needed money, not infrequently, he aimed for the slicks: Collier’s, Red Book and Liberty, territory canvassed with more success by the likes of F. Scott Fitzgerald.

The stories show ambition, with mixed results, to break out of the pulpy prison of crime writing. He wanted, he said, “to make literature.” The irony is, he did just that when he set his stories in a world of grit and gumshoes. Leave love and lamentation to others. Hammett couldn’t have written The Great Gatsby, nor could Fitzgerald have created The Maltese Falcon.