The incredible journey of Nujeen Mustafa

How can a girl flee the horrors of Syria if she can’t even walk? Nujeen Mustafa shows the way. 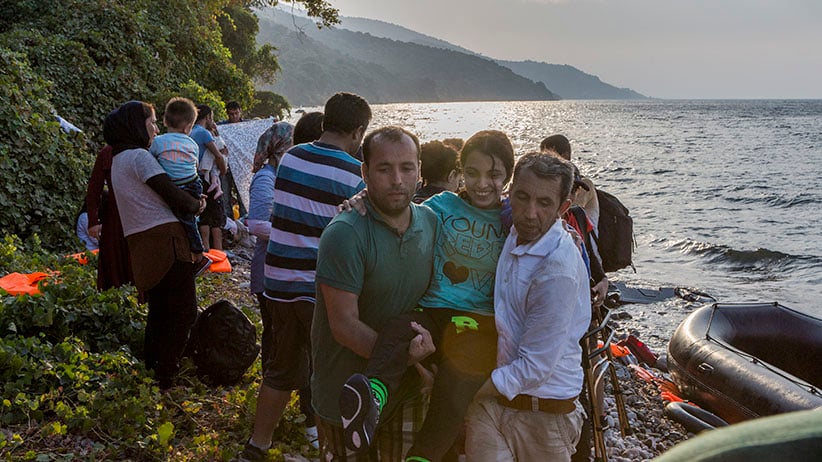 Nujeen Mustafa arrived on the island of Lesbos with her wheelchair, a rarity among refugees. (Ivor Prickett)

Thirty-eight refugees in an inflatable dinghy; one of them, Nujeen Mustafa, in a wheelchair. Other passengers prayed and cried and bailed water with shoes, but Mustafa, despite getting bruised in her turbulent chair, imagined herself as Poseidon aboard his chariot. “I looked at it as a teenager would,” she says. “As an adventure. As something fun.”

Mustafa, 16, escaped Syria last year with her sister. She has now written a book, Nujeen, with BBC foreign correspondent Christina Lamb, who previously co-authored I Am Malala. Mustafa has cerebral palsy, making her muscles spasm and preventing her from walking. Yet, in her story, her disability is a remarkably minor subject—one more challenge in the journey of a refugee, who navigates nine countries and meets a cross-section of humanity, while largely subsisting on sugar cubes. “It didn’t give me much time to think of the wheelchair,” she says.

Her disability gets the most attention during her pre-war life in Aleppo. No elevator serviced her apartment building, so her family had to carry her up and down stairs. She didn’t attend school, for she endured ferocious asthma attacks. She spent her years memorizing facts from National Geographic documentaries and American soap operas, particularly Days of Our Lives. Her family of eight children lived off money from her eldest brothers. Her only friend, temporarily, was a pet tortoise. Doctors didn’t help; when Mustafa got casts to try to lengthen her Achilles tendons, she compared the treatment to “something from one of al-Assad’s torture chambers.”

Soon, the topic of Mustafa’s wheelchair faded beneath gunfire. Her family tried moving to a quieter city, where rebels offered cantaloupe-eating contests for kids. But they decided Mustafa and one of her sisters, Nasrine, should flee (other siblings took different routes), destination Germany, getting pushed along the way. The sisters flew to Turkey, took taxis and buses to Lesbos, at one point helped by Moroccan men who created a pulley system to haul Mustafa up a cliff. They sealed their “all-precious phone” in a party balloon, boarded a boat and crossed the ocean, arriving on the island of Kos just two hours after Alan Kurdi’s body washed up on that shore. Blissfully unaware, Mustafa laughed in delight of the boat ride. “You need a psychiatrist, laughing here,” another passenger spat.

Her spirit stayed buoyant. “She was the first that any of us covering the crisis had come across in a wheelchair,” says Christina Lamb, who encountered her later at the Hungarian border, on the day Hungary closed its doors. Mustafa considered her and her sisters as “ﬁve-star refugees,” even though they stayed at camps where staff wrote numbers on her wrist in Sharpie (she became 81 at a camp in Slovenia; 702 in Austria). “I’ve never met anyone whose positivity shines through as much as hers,” says Lamb, who tracked down Mustafa and learned her story. “She really played it down,” says Lamb, meaning her wheelchair. “Her focus was much more on the determination to get to Germany and what she got to see.”

Ironically, as a refugee, Mustafa started to fit in socially like never before. Her command of “soap opera English” qualified her to serve as a translator for other migrants, and although her brother planned to fly her from Croatia to Germany due to her wheelchair, she begged him to make the journey by land—“like everyone else.” She explains, “Going on a plane would’ve been boring. It’s just flying. Doing a journey across Europe seemed much more fun.”

Through Slovenia and Austria she came, finally, to Cologne, where she has settled with her siblings and their children. She adores “Mama Merkel”—“she’s proving to be just as good as the queen of Palmyra”—and she Skypes her own mother and father each day. Her parents are still in Syria but hope to reunite with the family in Germany. Wheelchair basketball offers exercise; otherwise, Mustafa drives an electronic, royal blue machine that she calls her car. She attends a school for students with disabilities and plans to become an astronaut. “I want to float,” she says. “I’ve always been intrigued with space—the quietness and silence of space.”

Beginning last November, Mustafa recounted her journey by emails, Skype calls and meetings with Lamb. “Even intimate details had to be included in the book,” says Mustafa. “I tried my best to be some kind of messenger.” As a minor with asylum, she cannot leave Germany for a book tour but finds adventure regardless. She recently crossed the Rhine River. “We got some water on the boat,” she says, “but just some drops.”

FILED UNDER: Editor's Picks I Am Malala Nujeen Mustafa Syria The Vault