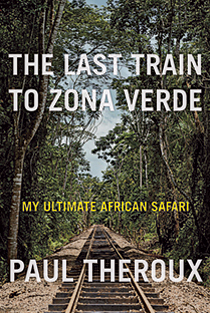 The Last Train to Zona Verde

Theroux is back on the rough road at age 70, still resolutely committed to land travel and scornful of the heedless speed of an airplane. This time, he’s en route from Cape Town, South Africa, to Luanda, Angola. His account is a delight, though things are rarely very pleasant for our hardy guide, who meets his match in miserable and ubiquitous African slums. Confronted with an “itinerary of urban squalor” and finding facsimiles of slum horror, he calls it quits in Luanda. No matter: he packed in enough voyage to fill 368 rich pages.

Along the way, we follow Theroux atop an elephant for a cushy safari in anthropologist-infested Namibian bush, along war-scarred Angolan roads. We benefit from his keen eye and sharp critiques, but never absent is an abiding self-awareness of his status as a “romantic voyeur.” He finds some good news in South Africa, ambivalence in Namibia and a hellhole in Angola. Implicitly, Theroux embeds an overriding argument in favour of travel in “the old, laborious way into the unknown.” He adds: “If the Internet were everything it is cracked up to be, we would all stay home and be brilliantly witty and insightful.” Alas.

The journey is more bleak than not, but Theroux the writer revels even when Theroux the tourist suffers. Of a tour around the magnificent coast near Cape Town, he confesses, “It was all so undemandingly pleasant there was nothing to write about.” Poor guy. Later, he reports that as a traveller “intending to write a book,” his nasty border crossing into Angola “could not have been a richer . . . experience.” The reader becomes glad for his discomfort and rightly suspicious of Theroux’s existential what-am-I-doing-here routine. I say: continue to endure what you can, you blessed old wanderer, and keep reporting back to us.