Book Review: The Lost Whale: The True Story of an Orca Named Luna

By Michael Parfit and Suzanne Chisholm 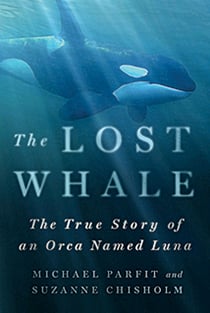 The Lost Whale: The True Story of an Orca Named Luna

By Michael Parfit and Suzanne Chisholm

It’s been more than seven years since Luna, the orphan orca that made its home in an inlet off Vancouver Island, died after colliding with a tugboat propeller. By then, his story was known around the world—the friendly little whale that had somehow been separated from his pod and became the object of a “tug of whale” between local First Nations, marine biologists and the Department of Fisheries and Oceans. Parfit and Chisholm, who first began researching Luna for a magazine story, ultimately came to see themselves as something akin to his guardians. Their book explores several questions the orca provoked. How did such a resilient, healthy animal become estranged from his family? How do humans know what is in a wild creature’s best interests? And is language the true agent of consciousness, or just a “clumsy shadow of what is real,” as Parfit began to suspect the more he interacted with the highly sociable and seemingly sensitive Luna?

Rewinding back to 1999, when Luna was first spotted in U.S. waters, Parfit recounts the little that is known about the whale’s early days. Even as a calf, Luna was caught between conflicting agendas—two mothers claimed him as their own. While this family drama eventually resolved, there is the sense that it may have been a factor in Luna eventually losing his way. Orcas form lifelong bonds with blood relatives, upon which they depend for survival. Luna had no trouble finding food, but he seemed always to crave company. When he surfaced in Nootka Sound, he quickly set about winning over everyone he encountered—rubbing up against their boats, blowing raspberries at opportune moments, looking them straight in the eye.

Parfit sets a poetic scene in Nootka Sound (at times a bit indulgently), with its winter rain that “falls in curtains as gray and heavy as chain mail.” His more meaningful meditation is on the intensity of emotion Luna unfailingly evoked in people. The assumption was that the whale was lonely, seeking love, help and companionship from humans. What if, Parfit finally wondered, Luna was actually offering these things?