Blending memoir and the latest research on the brain, including an exploration of what might cause OCD, author David Adams offers few cut-and-dried answers 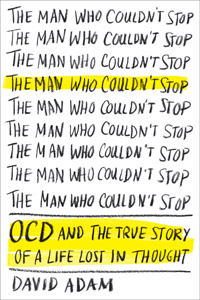 THE MAN WHO COULDN’T STOP: OCD AND THE TRUE STORY OF A LIFE LOST IN THOUGHT

Almost everyone has intrusive thoughts, from the mental flotsam of irrelevant images that flash into one’s mind, to the random and disturbing ideas that seem to come from nowhere: What if I were to jump in front of that train? What if I were to steer my car into oncoming traffic? Most of us shake them off. But David Adam, a writer and editor at Nature magazine, could not. His irrational fear of contracting AIDS from toilets, towels and handshakes and, after his daughter was born, of infecting her, turned into obsessive-compulsive disorder (OCD). A severe and crippling illness affecting three per cent of the population, OCD is defined as much by the torment of recurring strange thoughts as by the actions that bring relief: Some sufferers spend hours compulsively washing their hands, while others need to count, tap or repeat certain words. Adam opens his book with the case of the Ethiopian schoolgirl, who, to relieve her anxiety, ate an entire wall of her home, piece by piece.

Blending memoir and the latest research on the brain, including a thorough exploration of what might cause OCD, The Man Who Couldn’t Stop offers few cut-and-dried answers: Only a fool or a liar will tell you how the brain works, Adam remarks. But while most people with OCD can’t be cured, some treatments can help them manage their condition. Adam benefited from the drug sertraline and exposure therapy, the final recommended exposure being to smear his daughter with his own blood (something he never did).

In May 2013, the American Psychiatric Association reclassified OCD from an anxiety disorder to a mental illness, giving it the credibility it formerly lacked. The real hope for OCD, however, lies in recognizing how interconnected mental disorders likely are, Adam argues. Recent research suggests OCD and PTSD could overlap, and OCD may be related to schizophrenia. This approach also proposes that mental illnesses are spread much more evenly through the population than we think. It turns out the rest of us can be “a little bit OCD,” even though sufferers find the phrase trivializes their distress.

Adam did not intend this as a self-help book. “If it merely prises open the eyes of [non-sufferers], something good will have come from what was my own frightening and miserable experience,” he writes. Mission accomplished.