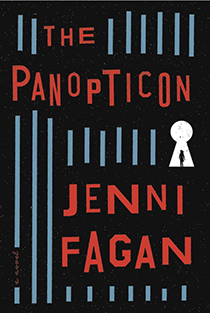 Shortly after Anais Hendricks was born, her schizophrenic mother jumped through a window and disappeared. Or so Anais has been told. “I dinnae trust social workers or their stupid stories. I’m a bit unconvinced by reality, full stop.” Instead, the firecracker who narrates this debut offering from Fagan (named one of Britain’s 20 best young novelists by the literary journal Granta), suspects she may actually have been grown in a petri dish by “the experiment,” a nebulous collective that is trying to work out “exactly how much f–k-you a nobody from nowhere can take.” Anais has been through 51 foster homes and one adoption in her 15 years; she’s accrued more than 100 charges—for drugs, violence and stealing the lights off police cars. As the book opens, she is being taken to the Panopticon, a home for young offenders outside Edinburgh. There is blood on her skirt and a policewoman is in a coma. Anais has no memory of any attack. Is the experiment setting her up?

A circular building in which residents are under constant surveillance, the Panopticon feeds right into Anais’s paranoia. And yet, she finds herself feeling at home, plus an ally in her support worker, Angus. As it turns out, rather than being smothered by scrutiny, the teens who live in the Panopticon are left too much to their own devices—to do drugs, administer vigilante justice, even to work the streets while out on community passes.

Anais believes she won’t live to 16—the men in black hats with no noses (dispatched by the experiment, of course) will get her first, she figures. (Sixteen is also when she ages out of the child-welfare system.) Her last three wishes? To fly, to “achieve something” and to meet someone—anyone—to whom she’s related. “Imagine knowing that you came from people with hearts and souls,” she muses. Imagine not knowing.