The real reason authoritarian populism is on the rise: it's simple

American-Polish writer Anne Applebaum probes the decline of a just society in the U.S., Britain and Poland in a new book, titled 'Twilight of Democracy: The Seductive Lure of Authoritarianism' 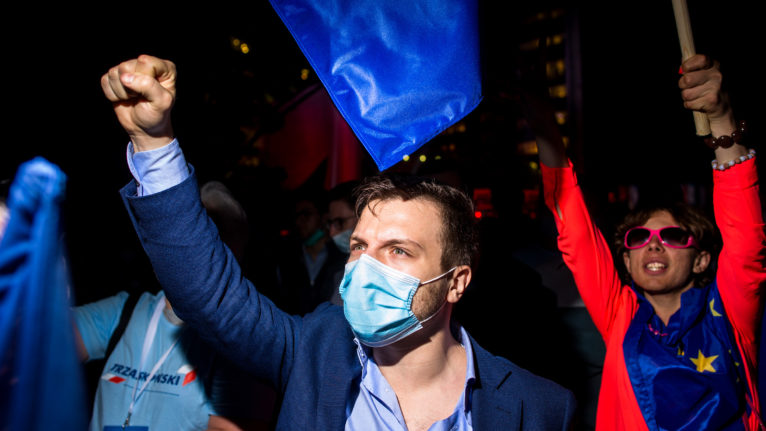 In the past 20 years, says Anne Applebaum, she’s seen the same development repeat itself in “all three of my countries.” The American-born writer, 55, known for her articles and books on Eastern Europe, has spent years as a journalist in Britain and later in Poland, where she is now a citizen. “A lot of people I know—some of them used to be my friends—have made very different political choices,” Applebaum observes in an interview. Some, like her, have remained committed to liberal democracy with all its messy imperfections, while others have veered toward right-wing populism and authoritarianism. They support the Law and Justice party in Poland or cheer on Brexit or Donald Trump. “I thought it was no accident this was happening at the same time in those places, and in other parts of the West, too.” So Applebaum wrote Twilight of Democracy, a book alternately personal and political, which examines the emotional pull of what its subtitle calls The Seductive Lure of Authoritarianism.

Twilight is bookended by parties, not political but social, a metaphor that’s not really metaphorical at all considering how her guest lists have changed over the years. At a millennium-welcoming New Year’s Eve party hosted in 1999 by Applebaum and her husband, Radek Sikorski, then a deputy foreign minister in the centre-right Polish government, most guests were “conservatives but also, at that moment in history, classic liberals,” says the writer, believers in democracy, neutral institutions and free markets. Today, in one of the most polarized nations in Europe, half of them would run across the street to avoid the other half.

One guest, godmother to one of Applebaum’s two sons, is now an adviser to Law and Justice, which—since coming to power in 2015—has stacked the country’s judiciary and civil service with party loyalists while fostering anti-gay and anti-Semitic propaganda. Another guest has become an internet troll promoting wild conspiracy theories, including claims of Jewish responsibility for the Holocaust. A third has revived a faltering journalistic career by referring to Jews as “scabby” and “greedy,” and now appears often on party-controlled state TV. The same has happened, with less personal sting, in other centre-right groups in Britain and the U.S., where Applebaum once felt at home: in the glow of Cold War victory, when Francis Fukuyama was describing liberal democracy as the final form of human governance in The End of History, the centre could not hold.

It shouldn’t have come as a surprise, Applebaum says. Western nations have always held groups with very different definitions of their countries: “One is a mystic, nativist, ethnic nation, the other is a state that should deliver justice for its citizens and treat them equally.” Then there is the “authoritarian predisposition,” the author argues, referencing the work of Australian psychologist Karen Stenner. Imperial nostalgics in Britain, Americans seeking to make America great again and Spaniards recalling a unified nation under Franco are all people with us-vs.-them thinking, who tend to “find authoritarianism appealing because they prefer simplicity,” Applebaum continues. “They are bothered by the grating arguments and endless political noise of democracy. They are also bothered by diversity, racial or political, and by rapid change.”

Combine that with social media’s capacity to engage and unite them, and with what Applebaum does see as a new phenomenon—career opportunities not just for flailing journalists but for amoral politicians with no larger aims than gaining power—and it is not surprising, she concludes, that authoritarian populism is on the rise. What it promises is more alluring than policy: more stasis than progress, “more identity than ideology.” What it threatens is demagogues promoting causes from birtherism to Brexit without real convictions of their own, and governments trying “to end political debates by ending fair elections, and making sure that no one else can ever govern.”

In contemporary Western politics, COVID-19 is the wild card, a black swan event that has seen populations both surrender unprecedented control to governments and push back against state overreach. And one hopeful fact is clear, Applebaum says—the countries that have done best during the pandemic are those with trusted and non-partisan bureaucracies.

As for the future, she concludes, “It’s up to us.” Perhaps democracy will fade away, as it has before, or perhaps it will be revived by those who deny “profound cultural clashes and unbridgeable identity gaps” between people. Applebaum knows some already. She met them, friends of her young sons, at a party she and Sikorski threw in August 2019.

This article appears in print in the August 2020 issue of Maclean’s magazine with the headline, “Seduction by simplicity.” Subscribe to the monthly print magazine here.