The 286-day marriage of Joe and Marilyn 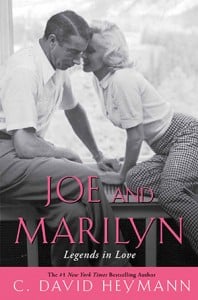 Hundreds of books have been published about Marilyn Monroe. Her films, her clothes, her pains and passions, her death, her iconography, have all been endlessly dissected, for better and for worse. There’s even a tail-wagging tale told from the perspective of Maf (as in mafia), the white French poodle presented to Monroe by Frank Sinatra, and a forthcoming novel that casts her as a Soviet agent charged with undermining the Kennedy clan.

To varying degrees, each of these volumes addresses Monroe’s second marriage, to outsized baseball hero Joe DiMaggio. Joe and Marilyn, by the late C. David Heymann, is the first to focus exclusively on their roller-coaster relationship. Heymann’s name may give some readers pause. He came under intense fire three decades ago when Poor Little Rich Girl, his biography of heiress Barbara Hutton, was recalled due to egregious factual errors. Here, though, his research seems embracive, and his sources credible.

Monroe and DiMaggio were, when they met in 1953, two of the world’s biggest celebrities, her star in ascendance and his stellar, 13-season career with the New York Yankees just ended. She was insecure and needy yet free-spirited and thirsting for knowledge. He was conservative and taciturn, content watching TV and reading comic books. Their marriage lasted just 286 days, unable to withstand such polar-opposite sensibilities and intense public glare. But they remained friends (and lovers) and were allegedly, prior to her untimely death in 1963, considering remarriage. He sent roses twice weekly to her gravesite for 20 years.

Throughout this dual portrait, the depth of detail is tremendous, often to the point of excess, with such minutiae as flight schedules, restaurant visits and shopping excursions painstakingly recorded. Given the enormity of their individual and shared fame, Monroe and DiMaggio crossed paths with countless public figures, and their story is littered with showbiz, sports and political elite. Most intriguing are their respective connections to a murky tangle of JFK, RFK, Sinatra and Peter Lawford alongside a parade of passed-around showgirls, starlets and high-ticket call girls.

Heymann’s core hypothesis, hardly original, is that, among the myriad opportunists and hangers-on who engulfed Monroe, DiMaggio remained one of the few confidants she could implicitly trust. He wanted nothing from her but love, companionship and, by mutual consent, sex (their rabbit-like libidinousness, together and with others, is exhaustively documented). She yearned for a protector who was equal parts father figure and playmate. Sadly, neither ever fully got their wish.