The systemic ills of medicine on black America

Book review: In 'Black Man In A White Coat,' a black doctor takes a hard look at his industry's relationship to his race 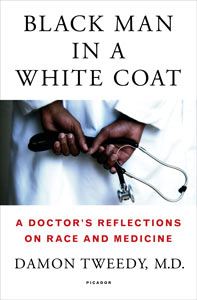 BLACK MAN IN A WHITE COAT

“In America,” writes Ta-Nehisi Coates in his most recent book, Between the World and Me, “it is traditional to destroy the black body. It is heritage.” Coates was referring specifically to the history of slavery in the United States, to the law-enforcement officers who readily exert physical force on young black men in great numbers, and to the legacy of racism that enables these dynamics. But his words serve as a fitting backdrop for Black Man in a White Coat, which examines, with care and clinical authority, the way the health care profession fails—and, occasionally, heals—the bodies (and minds) of black Americans.

As a black doctor who studied in North Carolina, Tweedy takes both a personal and professional interest in his subject matter. Now a professor of psychiatry at Duke University and a practising physician at the Durham VA Medical Center, he reflects on the culture shock he experienced during his earliest days in med school; even in the ’90s, when he began his training, there were only a handful of black faces in his classrooms. In one scene, Tweedy recalls how a professor mistook him for a campus maintenance worker. “Race was the ﬁrst thought that entered my mind,” he writes, frustrated by his teacher’s assumption.

Though the book follows Tweedy from med school, through residencies and into his years as a full-fledged doctor, his primary concern is how his own experiences shed light on larger systemic ills. He provides deft analyses, for instance, of the social conditions that result in disproportionately high rates of hypertension among black individuals.

Tweedy uses vivid anecdotes to ground his critiques of physician prejudice and health concerns that affect his community: Two colleagues give a patient a questionable mental-illness diagnosis because he questions their recommendations; a woman at a rural clinic can’t afford the hypertension medication she desperately needs because her meagre income is too high for her to qualify for Medicaid. “I feel . . . that the greatest lessons still come from the stories of doctor-patient encounters,” he writes. “Medicine, no matter the many changes it has undergone . . . remains at its essence a . . . human-to-human endeavour.”

It’s this investment in the personal that makes Black Man in a White Coat especially powerful. Tweedy’s perspective—and his willingness to challenge his own fundamental biases—puts a voice to a social epidemic that demands to be addressed.