Review: The Testament of Mary 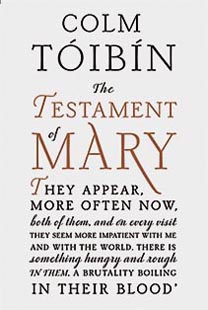 Mary, the mother of Jesus, despite being at the heart of a vast cult for 2,000 years, has not received the fictional treatment her son has had from modern authors. Whether that’s because of that widespread devotion, or because she is not the centre of the Gospel story, or because mothers are, well, sacrosanct, is an open question. But Irish novelist Toibin, one of the most admired of contemporary English-language authors, clearly has a thing about mothers—consider his 2006 short-story collection, Mothers and Sons, which explored some very fraught familial relations indeed.

This powerful novella (104 pages), which began life as the play Testament, presents a Mary still torn apart by the brutal death of Jesus years before, and bitterly recalling the misfit crowd he ran with, whom she believes set him on the path to crucifixion. Mary is still aching, in particular, from those Gospel-recorded moments when mother and son no longer even recognized each other: “Woman, what have I to do with thee?” (John 2:4)

She is reluctantly telling her story to two unnamed men who are demanding it of her, one of whom “was there with us to the end, ready to hold me and comfort me,” although he is now impatient with her reticence and interest in unimportant details. Plainly, he is the beloved disciple, the Apostle John, preparing his Gospel and disoriented by memories so different from his own. The other man has none of John’s gentleness, or even any respect for the mother of Jesus: “My very voice fills him with something close to disgust.” A theoretical theologian, then, a reader realizes, someone who wants to cast the story in symbolic terms of light and darkness, impatient with the human blood and agony that preoccupies Mary. In the end, they appall her with their calm acceptance of Jesus’s death. Once she learns what they truly believe about her son, all her raw maternal pain emerges: “When you say that he redeemed the world, I will say that it was not worth it. It was not worth it.”