The trouble with predicting the future 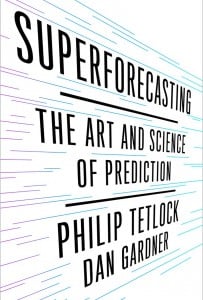 Any title with the prefix “super” ﬁts right into our world of hyperbole and hot takes, but, under a whooshingly dynamic cover, Superforecasting offers a vigorous argument for common sense.

Tetlock, a Toronto native who studied at the University of British Columbia and now teaches psychology and political science at the University of Pennsylvania, is best known for conducting a 20-year study of “expert” academics’ and pundits’ current-issues forecasts (from 1984 to 2004), which concluded that, on average, they were no more accurate than a dart-throwing chimpanzee. From 2011, the U.S. government, embarrassed by its intelligence failure regarding WMDs in Iraq, funded him and his wife, Barbara Mellers, to run the Good Judgment Project, a four-year study of volunteer forecasters to see who gets the future right, and why. This group of “regular” folks responded to such time-specific questions as, “Will Italy restructure or default on its debt by Dec. 31, 2011?” and, “Will either the French or Swiss inquiries find elevated levels of polonium in the remains of Yasser Arafat’s body?”

The armchair pundits—including a filmmaker in Brooklyn and a housewife in Alaska—ended up outperforming university researchers and professional analysts. (The amateurs are paid with an annual $250 gift certificate at Amazon, rather than receive a volunteers’ honorarium.) Tetlock offers a number of conclusions: First and foremost, there are no certainties; one doesn’t outright predict the future with “slam dunks” (as the CIA did with Iraq), but with more and more educated guesses, using continually calibrated odds. Also important are context and perspective: Tetlock encourages us to try to look at events from a multitude of angles, as if we had dragonflies’ eyes. Adding animal metaphors (and borrowing from Isaiah Berlin), Tetlock extols the supremacy of “foxes” (thinkers who take into account many ideas) over “hedgehogs” (pundits who have one Big Idea they believe solves everything, e.g., “lower taxes!”). The latter are more likely to be given their own TV shows—and also to be flat-out wrong.

Mistakes are inevitable and acceptable, Tetlock argues, as long as we learn from them. The key is to adapt. Admittedly, none of this is very sexy, but Tetlock and Ottawa-based co-author Dan Gardner keep the book fizzing along with curious anecdotes, mental puzzles and debunkings of famous people’s fatuous predictions. Only in the conclusion do they indulge in pie-in-the-sky thinking, expressing hope that the wisdom of crowds can make people start abandoning partisan bias, and work together with their diverse points of view, across political party lines, to solve the world’s problems. It’s an idea so rational, it sounds like a dream.