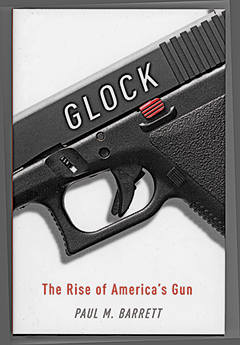 It’s the iconic gun of our times. More American cops and more American spree killers carry a Glock than any other handgun. It’s the weapon Seung-Hui Cho used to murder 32 people at Virginia Tech; the gun Saddam Hussein had in his hidey-hole; the gun that football player Plaxico Burress shot himself in the leg with; the gun Jared Loughner fired at Gabrielle Giffords and many others a year ago. And the gun Giffords herself owned. How a weapon made by an unknown curtain-rod manufacturer in Austria in 1980 reached these heights is part wild business story—the true interest of the author, an editor at Bloomberg Businessweek—and part cultural history.

When Gaston Glock learned the Austrian army was seeking a new handgun, he went to work unhampered by any firm opinion as to how a gun should look or what it should be made of. He emerged with the Glock 17. Crafted in part of lightweight plastic, with a large magazine (17 bullets) and only 36 parts, the pistol would still fire after being dropped from a helicopter or lying in snow overnight. Its preference for efficiency over style was nicely captured by novelist David Foster Wallace in Infinite Jest: “one ugly and all-business-looking piece of self-defence hardware.”

Its timing was impeccable too. The Glock arrived in America in the late ’80s, just as law enforcement agencies were in a panic about being outgunned by drug gangs. Hollywood and hip hop helped glamorize it: “As we groove down the block, Dre, pass the Glock,” rapped Snoop Dogg in 1992. Then there was the eye-popping business story. Marketing campaigns involving Gold Club strippers, money laundering, tax evasion and illegal campaign contributions are not exactly unheard of in the arms industry. But the company’s brief history also includes a crooked financial adviser who attempted to assassinate—with a mallet, not a pistol—Gaston Glock, now a billionaire. For an Austrian gun, it’s a very American story.