A review of 'The Burglary: The Discovery of J. Edgar Hoover's Secret FBI' 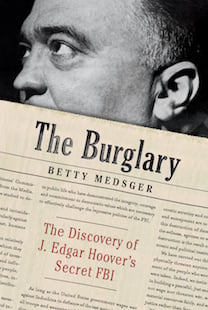 The Burglary: The Discovery of J. Edgar Hoover’s Secret FBI

This book is in some ways hacky—full of liberal clichés, organized eccentrically, and showing signs of last-minute emendation. But the story it tells is impossible to screw up. And it will be instantly, inherently essential to intelligence-history buffs.

In March 1971, a small cell of Vietnam War resisters broke into a regional FBI office in Media, Penn., making off with every file in the place. They were ordinary citizens, influenced by Quaker and Catholic Worker theology, who had become convinced of the necessity to non-violently defy the law in the name of civil rights and peace. Several were former Freedom Riders. Dubbing themselves the “Citizens’ Commission to Investigate the FBI,” they slowly and anonymously leaked the most interesting documents to a select group of reporters and columnists.

The effects are still being felt. The security screw-up alone would have brought political hell down on the FBI, but the commission’s evidence of out-of-control secret surveillance discredited J. Edgar Hoover in his last days, made the odious COINTELPRO known to the public, and led to the Church committee reforms of the later 1970s. This news coup was at least as important as Daniel Ellsberg’s nearly simultaneous publishing of the Pentagon Papers, but the burglars faded into the background of history because, unlike Ellsberg, they remained anonymous.

They intended to die that way. There were eight burglars, and seven have talked to Medsger, a former Washington Post reporter who had been the first to receive the Citizens’ Commission material. Five have allowed her to disclose their names. (They are covered by a statute of limitations.) All were middle-class civilians who had to learn the skills needed to commit the break-in; one, Keith Forsyth, learned locksmithing by mail order.

Their heist required immense courage and, for decades, they lived in fear of discovery and retribution. This was all the more difficult psychologically because (with the exception of married couple John and Bonnie Raines) they went their separate ways after knocking over the office. But what really strikes one is the imagination it took even to conceive of such a crime in a time of conformity and fear. It’s a story Americans should know—and a decent true-crime potboiler, too.