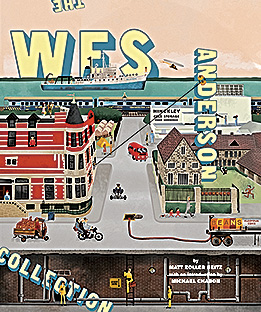 With only seven films under his meticulously designed belt, Wes Anderson seems an unlikely candidate for a career-spanning book. Yet there is much about the 44-year-old auteur that is unlikely, from his quick rise out of Austin’s hardscrabble film scene to his decision to make his sixth movie a stop-motion children’s tale, despite having never worked in animation before.

It is that combined sense of passion and curiosity that fuels Matt Zoller Seitz’s retrospective, which is as beautifully designed as Anderson’s own films. Unpublished behind-the-scenes photos, storyboard sketches and set-design artwork are delicately layered throughout the new book, each revealing the meticulous level of detail Anderson brought to everything from Bottle Rocket (where every sign is in the typeface Futura) to Moonrise Kingdom (in which Stanley Kubrick plays an unlikely source of inspiration).

The interviews peppered between the visuals, though, are less illuminating. Seitz, a television critic for New York magazine and the editor-in-chief of RogerEbert.com, never tries to hide his undying adoration of Anderson. The result is either cute or exhausting, depending on your fondness for the filmmaker (which, if you’re reading the book, is likely quite high). Yet no amount of Andersonphilia can justify the one-sided interviews, which for every nugget of wisdom from the director contain an equal amount of replies along the lines of “hmm,” “yep” and “right.” Left with little to work with, Seitz ends up carrying the conversations himself.

Perhaps Seitz should have limited the work to his informed essays and Michael Chabon’s poetic introduction, which rightly nails Anderson as one of this generation’s greatest storytellers—even if he is a man of few words.