REVIEW: True North: A Life in the Music Business 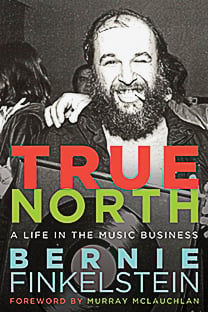 Talk about a coming of age. In 1966, Bernie Finkelstein was a 21-year-old pothead managing the Paupers, a psychedelic rock band from Toronto’s Yorkville. On his first plane trip, he flew to New York and got them a U.S. record contract and a club date. But he turned down an offer to share a bill with Canadian folk stars Ian & Sylvia, instead choosing to open for an unknown San Francisco group, the Jefferson Airplane. By the time the gig rolled around, in 1967, the Airplane was the band of the moment and the New York show was its East Coast debut. The Paupers blew away an audience that included Paul Simon, Beatles manager Brian Epstein and Bob Dylan manager Albert Grossman. The next morning, a blond with two joints in her hand knocked on Finkelstein’s door and offered to photograph the band for free. It was Linda Eastman, Paul McCartney’s future wife. Later that week, Finkelstein met Grossman at his home and got scarily stoned while transfixed by an Andy Warhol portrait of Elvis. The next day at Grossman’s office, the two men agreed to co-manage the Paupers—and Bernie met Bob Dylan on his way out.

Despite the Cinderella story, the Paupers never made it big. But after retreating to Toronto, Finkelstein went on to found True North, one of Canada’s most successful indie record labels—home to Bruce Cockburn, Murray McLauchlan, Dan Hill and Rough Trade. And with Bernie Fiedler, his management partner for a decade, he helped pioneer the Canadian music business, and the CanCon rules that nurtured it. True North is a modest, candid and lively memoir. By the time he sold his record label, it had released over 500 albums, 40 of them gold or platinum, and won 50 Junos. But Finkelstein insists he never cared about the money, only the music. A true Canadian, he lets his failures shine as brightly as his triumphs.

FILED UNDER: book review bookmarked True North: a life in the music business