Two lions in winter: How to save a public library 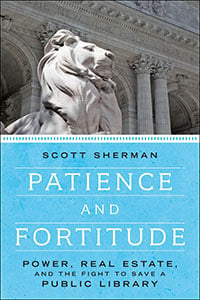 PATIENCE AND FORTITUDE: POWER, REAL ESTATE, AND THE FIGHT TO SAVE A PUBLIC LIBRARY

Change usually makes people nervous. When that change involves a radical overhaul of a beloved icon like the grand New York Public Library on 42nd Street, emotions are bound to be volatile. The library’s resplendent reading and research rooms have been used by everyone from Leon Trotsky to Bob Dylan. During the Great Depression, mayor Fiorello La Guardia dubbed the two lion statues guarding the library’s entrance Patience and Fortitude, a way to boost the city’s morale. As Sherman shows, patience and fortitude, as well as arrogance and chutzpah, were all in play in a recent clash of visions over the future of the library.

The NYPL is a private non-profit organization, rather than a wholly government-controlled entity. In 2007, as part of a “bold” plan to boost the library’s ever-troubled finances, the NYPL’s board of trustees, and its president and CEO, Paul LeClerc, quietly implemented the “Central Library Plan.” Wanting to take advantage of the pricey New York real estate market, they resolved to sell several branches, and relocate three million books in the stacks of the iconic 42nd Street library to a facility in Princeton, N.J. The savings would allow for a $300-million renovation to the flagship NYPL, making the main library more consumer-friendly and financially viable.

In a series of articles in The Nation magazine in 2011, Sherman chronicled the battle over the controversial Central Plan, the difficulties it faced after the 2008 market meltdown, and the vocal and ultimately successful opposition that was mounted against it. For those who want to know more, his book delves even deeper. Half of it is the story behind the plan, and the other is the story of how it was stopped by an organized protest of writers, historians and other luminaries appalled by the business approach adopted by LeClerc (the villain of this tale).

Sherman, however, is an outsider trying to open doors that remained closed; as he concedes, few of the key players in this Seinfeldian melodrama would talk to him. As a result, too much of the book is based on the accounts of individuals removed from the intrigue, or taken from newspapers, magazines, even blogs. Its lesson, though, resonates beyond those closed doors and the city they’re a part of: Libraries, including the one at 42nd Street and Fifth Avenue, may not be as well-used as they were 25 years ago, and we may be living in the digital age, but some sacred institutions are best left alone.