Tyrants, then and now

Not all tyrants are Voldemort. Waller R. Newell explains why. 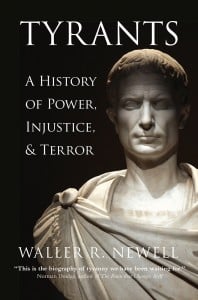 The history of tyranny is not black and white; not all tyrants have been Voldemort-like, argues Newell, a professor at Ottawa’s Carleton University. He examines a long line of them, from Roman emperors and Robespierre to Hitler, Stalin and the ayatollahs of Iran. Tyranny, he finds, has had a “strange career . . . as both the oppressor of liberty and the builder of civilizations.” Moreover, tyranny is also about personalities who attract zealous followers. These power-seekers are “outsized, sometimes charismatic, sometimes amusing, always fascinating and frightening,” a description that could fit Donald Trump. (The leaders of the Islamic State are merely “tyrants in waiting,” he says.)

Newell offers a thought-provoking and engaging overview of injustice and terror over thousands of years. In his analysis, there have been three types of tyrants in the Western world. The“garden-variety” tyrants were men (they have been mostly men) like the Roman emperor Nero, Gen. Franco of Spain and Papa Doc Duvalier of Haiti, who ruled to enhance their own pockets and power. Second were the reforming tyrants, leaders such as Henry VIII of England, who arguably laid the foundation of the modern European state, and of the British Empire, yet equally sought honour and power in a ruthless fashion.

Robespierre is in the third category, the millenarian tyrants. He and his Jacobin fanatics destroyed the idealism of the French Revolution and imposed in its place the executions and totalitarianism of the Terror—a model for Stalin, Hitler, Mao and Pol Pot. The millenarian tyrant aims to reshape and purify society, without regard to law or compassion. Individual needs are crushed so that the needs of the collective become supreme.

The best current example of an autocrat who embodies all three types: Vladimir Putin, whom Newell describes as a “reformer and kleptocrat with a dash of the millenarian.”

The theory of Western progress is that civilization is advancing and that liberal democracy will ultimately replace all other forms of government. That’s comforting, but not likely, according to Newell. “However many times decent people express the decent hope that mankind has learned its lesson,” he writes, “the drive to tyrannize is a permanent passion in human psychology . . . We will always have to be on guard against it, prepared to resist it, if need be to fight it.”