The Northwest Passage brought Kathleen Winter to a land too eloquent for fiction. 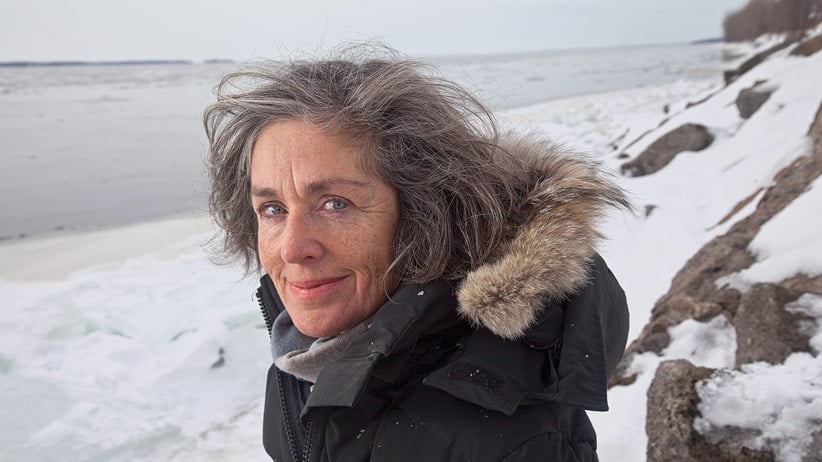 In 2010, Kathleen Winter’s novel Annabel was the only book to make all three major Canadian fiction shortlists. Boundless, the 54-year-old Montreal writer’s account of her journey through the Northwest Passage, has made a similar impression on non-fiction juries. Winter was transported by what she saw—“the land, the people, the animals, the light”—and her prose is lyrical enough to have graced another novel. But she was also dismayed by the collision of South and North she saw, and opted for a memoir: “I didn’t want people to think I had made up any of it.”

Here, as part of a series on the RBC Taylor Prize nominees, an exclusive excerpt of Winter’s book, Boundless:

There’s a space between desire and fruition, idea and being, wishing and consummation, and I recognized that territory. It’s the gap in which a child asks, “Are we there yet?” It was the thing I was searching for when I went alone, in my twenties, to Naples from Paris after my stowaway attempt. In Naples I watched fishermen throw their live catch into crates, and walked alleys where women hollered from windows as they lowered baskets of laundry and tomatoes. I’d stayed in a hotel whose courtyard had casements out of which flew passionate arguments, chairs, lamps, tables with the tablecloths still on them, all plummeting to the cobblestones. “Are we there yet?” I asked a Neapolitan lover and an Egyptian pursuer offering a white box tied with a ribbon I never did open—Naples was a dangerous city from which I escaped in time, but in that danger I reached for a place of immersion and belonging that existed for others but not for me.

Everyone longs for a secret door, an opening to a world beyond loneliness—it’s part of the human imagination. But stand under the lowering baskets in Naples all you want—you can’t climb in, or be the women lowering them or the youths catching them and hoisting them to market. And these Arctic hills, gold, blue, and purple, were achingly remote: our ship floated past and they lay just beyond reach. Each breath was a cold shock and the land was magnetic, like an encounter with someone who truly sees you: yet we were offshore.

“It looks so . . . unattainable,” I said, gripping the white rails.

Perhaps she was a woman who had no desire to attain anything. If she and I were both starving and we sat at a table on which someone placed a delectable piece of roast meat, I’d pounce on it, whereas Elisabeth could sit with her hands folded for an eternity, not eating a morsel unless it was proffered by the person responsible for its appearance. She wouldn’t even look hungry.

I knew the land wasn’t sitting inert. It was acting on us, and I was unprepared. The land was a companion, alive. It had something to say, but we were too far off. It whispered and had a body. I hadn’t known land had a body, or was a body, though people are forever saying “a body of land” or, for that matter, “a body of water.” I’d thought it a figure of speech, but now I remembered the words “figure” and “body” meant the same thing.

I said, “The land is a body, and I am beginning to think it has something like speech.”

“It is very eloquent,” Elisabeth said.

We stood together and held the rails and I was glad the rails were white, a quiet colour that held all colours and did not fight with the promises or whatever eloquence existed in the body of the land: eloquence standing in the mountains or reclining in the slopes. I was glad our ship was blue and white, the colours of the water, and that our spirits were quiet, Elisabeth’s and mine, not chattering or trying to translate what was being said or held by the ground in front of us. I thought of promises ricocheting all over the south: on signs, in mouths, on TV and radio and online. Search no more, promised the signs: Here lies the end of your ravenous hunger in all its forms—just step right up, ladies and gentlemen. We all knew the promises were fraudulent, but did we ever stop yearning?

I remembered what our pilot said as we flew over the Ungava Peninsula and Baffin Island: “There you are, folks . . . a whole lot of nothing.”

But this wasn’t nothing. It was something. The land was present, Elisabeth and I were present to it, and there was a silent interaction. Something in the encounter, an elemental force, had begun to exert an influence.