A review of "Un-remarried Widow: A Memoir' 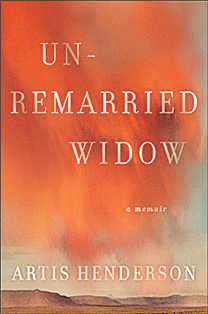 It is far too early to designate any book one of the best of the year, but I am reasonably certain that, when 2014 comes to a close, Artis Henderson’s memoir will be on my list. The bones upon which her first book is built—grappling with the death of her father in a plane crash when she was five, only to reckon with the death of her husband in a military plane crash 20 years later—could easily have turned into fodder for melodrama. Henderson, however, keeps away from cheap emotional manipulation, opting for the more difficult road of thoughtful ambiguity.

We first meet Henderson’s husband, Miles, when he dreams his own death, so the reader knows what’s ahead. But what follows, in a fragmented sequence that bounces between decades, is Henderson’s own complicated journey. She breaks her spine in the crash that killed her father, suffers through a difficult adolescence, and then her college dreams of creative freedom crash up against the more conservative sensibilities of the man who will be her husband. In the midst of constant prolonged loneliness, and a creeping depression, Henderson can’t help but contemplate the larger question of, “What if you love someone with all your heart but you’re afraid that being with him means giving up the life you imagined for yourself?”

One answer proves to be: “You figure out how to make it work.” Miles’s death comes after they have made their differences work, which is tragedy enough—but it also allows Henderson’s dreams another chance, a truth she doesn’t sugarcoat. But before she can replant those dormant seeds, she must still learn what it is to be a military widow, to take comfort in the grief offered by others, to find solace only among those women who have shared the same horrible experience, and to fight the government for the truth of Miles’s crash—and this, too, proves more ambiguous than first appeared.

Henderson’s writing favours stark facts over florid description. The reader feels the jagged numbness of Henderson’s grief, but also understands her joy at discovering that once buried, now robust, writer self.