'What is it about me that you guys don't know?' 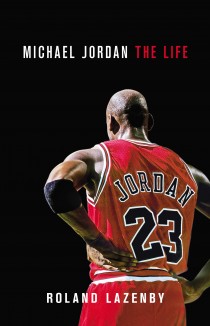 His 2009 induction speech at the Basketball Hall of Fame has been decried as petty, even more so because of the speechgiver’s pedigree: Michael Jordan, the transcendent athlete and gambling addict, the larger-than-life six-time NBA champion and small-minded competitor, the ur-figure at the axis between sports and pop culture, spent 20 minutes settling ancient scores from the dais, a decade after his career ended. That night, he asked the throng, after a highlight reel of his career rolled: “What is it about me that you guys don’t know?”

The question was rhetorical, because the answer is “not much.” Lazenby, an award-winning sportswriter, knows this well; so much ink has already been spilled documenting this divisive sports figure. But at 700 pages, this is a tome that oozes importance, that promises–and delivers–detailed and sometimes recondite insight into the man who felt it right to launch missiles while being feted at his own party.

That’s an extra tricky job due to Jordan’s heroic creation myth—of the things Jordan did well, that’s what he may have done best. In fact, Jordan refused to be interviewed for the book without editorial control. (He did not get it.) “The Jordan family fable has been told again and again, but it is a false narrative in many key aspects,” Lazenby writes. He debunks Jordan’s claim that his high school coach cut him from the team; he reveals allegations that MJ’s murdered father, James, molested Michael’s sister and defrauded his employers.

It is, then, a book of shadows: not just of James’s secret darkness, but of the lesser lives that passed through Michael’s. Sure, there are fascinating relationships with big names like Dean Smith and Scottie Pippen, but the small names best illuminate Jordan: that high school coach, in truth caring and paternal, who succumbed to mental illness in the wake of Jordan’s callous myth-building; the point guard at the 1983 Pan Am Games who outshone him but was swallowed up as a footnote to his hype; his great-grandfather, a moonshiner hardened by racism and poverty.

The detail is sometimes tedious, but the dream of the non-fiction writer is to condemn future books on the same subject to irrelevance. It’s possible Lazenby has achieved this lofty goal: nothing more needs to be written about Jordan. Perhaps it’s due time to close the book on Jordan the way Jordan himself cannot, with this definitive portrait finally marking the end of pop culture’s longest, saddest midlife crisis.