Book Review: What Soldiers Do: Sex and the American GI in World War II France 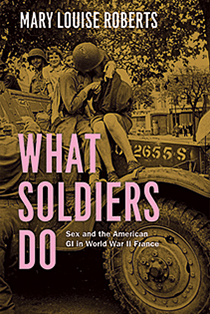 What Soldiers Do: Sex and the American GI in World War II France

The myth of the “good war,” the only such conflict anyone living has ever seen, still clings to the Second World War. Quite rightly, too, given the supreme evil on the other side. But the concept also obscures the undeniable fact that war is hell, and not just during combat. It took nearly half a century, and an entirely new understanding of rape as a war crime, for some aspects of the Allied war effort to get an airing; even then Taken By Force, American criminologist J. Robert Lilly’s study of the rapes of 14,000 British, French and German women by U.S. soldiers, first published in France in 2003, took until 2007 to find an American publisher. Lately, though, the pace has accelerated: Charles Glass’s The Deserters: A Hidden History of World War II came out in March.

Roberts’s book certainly deals with the worst atrocities, but also with more widespread sexual activity—literally, what soldiers do—that was made worse by a hypocritically winking high command. As an incentive to storm Hitler’s Fortress Europe, the army was blatant in extolling the presence of beautiful—and grateful—Frenchwomen on the other side of the battle. But U.S. authorities would not countenance brothels, for fear America’s moms and sweethearts would hear of them. The result, according to a letter from the appalled mayor of Le Havre, was an orgy of drunkenness, open sex bargaining and flagrant public sex scenes, and a raging epidemic of venereal disease.

Then there was the overt racism of the American response to particularly disturbing crimes: they habitually blamed black troops for sex crimes and punished them far more harshly than arrested whites. There are 96 grave markers in a special U.S. cemetery containing only men executed for rape and murder. Eighty of them—83 per cent—are black soldiers, from a segregated army that was less than nine per cent non-white. Roberts does not, in any sense, deny the heroism of the American liberators, but she doesn’t deny their human nature either.