A new book by historian Tim Cook looks at how World War II fits in Canada's historical imagination, and why it was vulnerable to neglect for so long 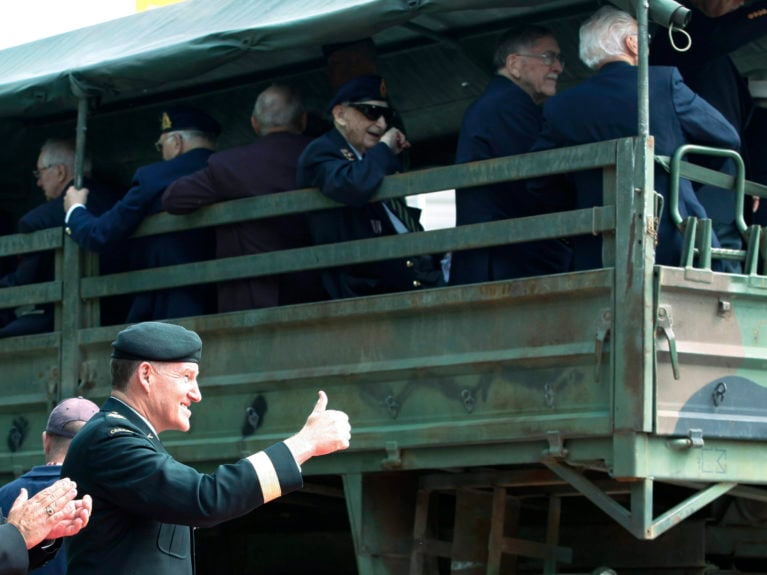 Chief of National Defence General Walter Natynczyk gives the thumbs up to veterans who arrive by military trucks in Ottawa on June 6, 2009 to take part in the 65th anniversary of D-Day (CP/Fred Chartrand)

It used to be easy to find a prime spot for watching the Remembrance Day ceremonies at Ottawa’s National War Memorial. Back in the late 1980s and early 1990s, there were crowds, sure, but no crush. If Nov. 11 dawned cold and rainy, veterans could afford to stay warm in a nearby Tim Hortons until shortly before 11 a.m. Reporters assigned to cover the event might not bother heading over to Confederation Square until the official program was nearly about to begin.

Then something changed. The turning point seemed to be the 50th anniversary of D-Day in 1994. Crowds swelled, media coverage expanded, and a populist instinct to venerate veterans took hold. For those who don’t arrive early, finding a decent vantage point remains a serious challenge. A new book by Tim Cook, an indispensable war historian, explores what feels like a permanent shift in how Canadians understand their military past.

In The Fight for History: 75 Years of Forgetting, Remembering, and Remaking Canada’s Second World War, he focuses on how World War II fits in the country’s historical imagination. Cook shows how World War I was always more easily cast as a nation-making conflict; the next war proved trickier to mythologize. As the author of admired histories of both the 1914-18 nightmare and the 1939-45 bloodletting, he is superbly equipped to frame the contrast.

Cook shows how the capture of Vimy Ridge by Canadian troops in April 1917 served as a stirring climax for World War I as a coming-of-age narrative. He surveys the World War II battles that might conceivably stack up, and finds all lacking Vimy’s emblematic stature: “The December 1943 Battle of Ortona was not on the same scale, the catastrophe at Dieppe was something quite different, and Canada’s heroic actions Juno Beach on D-Day were shared with other nations.”

Then there are the raw numbers. From a population of eight million, 66,0000 Canadians were killed in the First World War; out of 11.5 million, 45,000 in the Second World War. Add to that the grim fact that more than 18,000 bodies of Canada’s World War I dead were never recovered. “The missing of the Great War left a haunting legacy,” Cooks observes, “but the Second World War losses seemed to register less in the public consciousness.”

The two wars were memorialized differently from the outset. Canadians erected thousands Great War monuments, culminating with the 1939 inauguration of the National War Memorial in Ottawa, with an immediately recognizable array of First World War troops slogging out from under its arch. After World War II, “functional memorials,” from libraries to gardens to arenas, were widely regarded as the more appropriate choice.

Without a Vimy-like moment to elevate, or dedicated monuments to gather around, World War II was vulnerable to neglect. “Amplifying the problem,” Cook writes, “Canadian novelists, playwrights, and filmmakers mostly ignored the war.” And when storytellers finally remembered, it wasn’t to remind Canadians that the Second World War was about defeating Hitler, but rather to revisit its darkest, most divisive elements.

Cook devotes a key swath of his book to bemoaning the The Valour and the Horror. The three-part documentary series by the filmmaking brothers Brian and Terence McKenna, aired by CBC in prime time in 1992, represents, for him, the nadir of World War II’s place in Canadian discourse. He casts the McKennas as products of the “post-Vietnam period.” So, from the battles of 1944, they singled out the disastrous attack on Verrieres Ridge. “The countless Canadian actions and sacrifices in Normandy were reduced to a single defeat,” Cook writes.

But the biggest controversy stoked by The Valour and the Horror was over its depiction of the aerial pounding of German cities late in the war as morally depraved and strategically unnecessary. By the time the McKennas were making their film, Cook astutely observes, Cold War anxieties about nuclear bombs falling were ingrained.

“This modern fear of mass death reshaped how some viewed the bombing campaign of the Second World War,” he writes, “while others questioned it in light of the new international law about the treatment of civilians in a war zone.”

He indicts the McKennas for offering a “presentist” view, failing to recognize how Hitler’s Germany was seen at the time as an existential threat. Yet his own account shows that the obliteration of German cities from the air was from the start difficult to fit into any uplifting account of victory. Winston Churchill’s May 8, 1945, victory speech credited all aspects of the British military effort, Cook writes, “but made no mention of the airmen in the bombers who took the war to Germany.”

The outcry over The Valour and the Horror was soon followed by what Cook describes as shameful neglect of Canada in the 1984 ceremonies marking the 40th anniversary of D-Day. “It was as if Canada had not fought in the war,” he sums up. By then many Canadians had come to prefer identifying with, not battlefield exploits, but their country’s prominence in the tradition of UN peacekeeping that took hold in the 1960s, ‘70s and ‘80s.

After the fall of the Berlin Wall in 1989, however, attitudes began to shift. Conflicts in Somalia, Bosnia and Rwanda all drove home the reality of unpredictable and shocking violence in the post-Cold War era. “The comforting image of the peacekeeper had prevented many Canadians from engaging meaningfully with the Second World War,” Cook writes. Increasingly, that blue-helmeted image looked insufficient.

By the time of the 50th anniversary of D-Day, Canadians were primed for a revised view of World War II. “After years of neglecting veterans, the Canadian government celebrated the nation’s wartime record to mark the 50th anniversary of D-Day in 1994 and the end of the Second World war the next year,” Cook writes. He cites then-prime minister Jean Chrétien’s “stirring words” at Juno Beach, where the Canadian troops landed on D-Day.

The following year, hundreds of thousands of Dutch citizens lined parade routes as Canadian veterans returned for the 50th anniversary of the liberation of Holland. “After decades of indifference, Canadians woke up to see their veterans welcomed and celebrated,” Cook writes. “It was nothing short of shocking.” And not fleeting. He details how the new Canadian War Museum was born in 2005, creating a permanent focal point for war history framed as the story of “ordinary Canadian struggling in extraordinary circumstances.”

This national change-of-heart feels like the proper resolution to decades of ambivalence about World War II. There’s something missing, though. Cook is at his best throughout conveying the perspective of aggrieved veterans; he’s less attuned to political life. For instance, his account of the new war museum’s birth reaches a turning point when the Liberal government of the day doubles its funding to $100 million and gives it a more prominent location near Parliament Hill. But Cook doesn’t attempt to explain the upgrade.

Still, The Fight for History covers too much vital territory to fault it for leaving questions about relatively recent political decision-making unanswered. By exploring how Canadians arrived, after so long, at new ways of understanding World War II, Cook shows that even the most calcified historical perspectives can ultimately prove pliable. Anyone fighting for a better grasp of history—whether it’s our constitutional roots, our colonial past, or our heroes and villains—should take heart.