When parents turn on each other

Maclean's reviews The Farm, a thriller by Tom Rob Smith 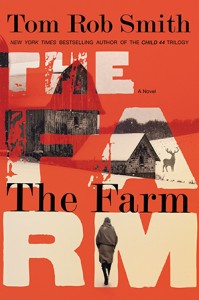 THE FARM by Tom Rob Smith

There’s a clue on the dust jacket hinting at how this rip-roaring thriller manages to feel so eerily real. It’s based on a true story. The author’s parents faced a similar crisis: after years of marital harmony, each suddenly suspected the other of malevolent goings-on.

Like the author, the main character, Daniel, is the son of a Swedish mother and British father. When we meet Daniel, he’s on his way to his flat, the one he shares with a gay lover his parents know nothing about. His father calls with the alarming news that his mother has gone mad. Daniel drops his grocery bag on hearing the shocking claim. The mother he knows is sane and non-combative. The last he knew, his parents had moved from London to a remote farm in Sweden to live out their lives in serene retirement. His father tells him he has had his wife institutionalized in a hospital but she’s talked her way out and is on her way to see Daniel. To Daniel, his father’s story sounds fanciful. “She talked her way out? The staff didn’t discuss her release with you?” he questions his father. “I’m one of the people she’s making allegations against,” his dad says.

When Daniel’s mum arrives she’s notably thinner, her trousers loose, her hair wet. Daniel’s mind rapidly assesses the evidence. “I didn’t dare leave her alone and feared that reporting openly back to my dad could make me appear partisan, something I couldn’t risk, she might begin to mistrust me.”

The bulk of the tale is told from the mum’s point of view as piece by piece she pulls from a satchel of evidence to implicate the townspeople and Daniel’s father in a conspiracy against her. A murder has taken place, she charges, and his father is mixed up with the group responsible. No detail is too trivial to escape her analysis. She’s asked to bring a potato salad to an event, concluding later it’s part of the plot to mock her.

“Holding a tub of potato salad—we’d looked idiotic. He couldn’t have asked me to make a less ambitious dish.” Smith’s writing brings to life characters so real and vulnerable you could no more put down their story than walk away from a friend in crisis.