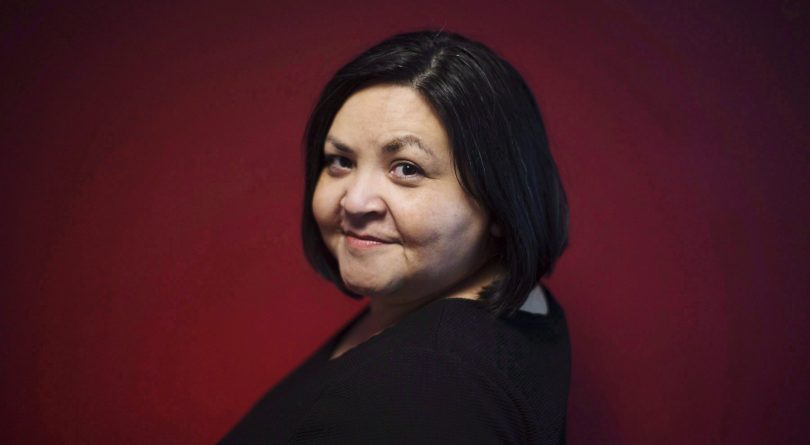 Author Eden Robinson is pictured in Toronto on Thursday, February 9, 2017. Eden Robinson, author of "Son of a Trickster," is the winner of the 2017 Writers' Trust Fellowship. THE CANADIAN PRESS/Chris Young

There have always been two ways to read Eden Robinson. There’s the path the 2017 Scotiabank Giller Prize jury took when it focused on the Haisla-Heiltsuk author’s no-holds-barred depiction of the multi-generational havoc residential schools have wreaked on Indigenous people in Canada, shortlisting Robinson’s Son of a Trickster for grounding teenaged protagonist Jared’s story in “gritty, grinding reality.” To do that, the jury had to whistle its way past the novel’s descriptive passages and plot turns—its witches, talking ravens and violent river otters with vengeance on their minds. That’s precisely not the approach taken by large numbers of Robinson’s fans, who revel in her vastly entertaining injection of Indigenous motifs and mythology into the fantasy genre. For the record, Robinson is fine with both readings.

“It can be interpreted that way,” she says carefully of the Giller response from her home in Kitimat, B.C. But Robinson is just as happy to agree her continuing project—Trickster Drift, the second volume of the Trickster trilogy, has just been published—could be described as blending vampire queen Anne Rice with First Nations mythology. “Yes! I’ve always loved horror,” laughs Robinson. “At the beginning of my career I was just fascinated by serial killers.”

But at this point in her life, gritty realism or even Grand Guignol horror are backdrop and not essence for her writing. “What I really wanted with the Trickster story was a book that was youth-friendly,” adds Robinson, 50. “There are a lot of teenagers who don’t know the Heiltsuk supernatural creatures, because the kids were adopted or their families decided not to go into the traditional culture. I wanted to create a modern telling for them, to ease them into the world my dad, my aunts, my uncles and my grandparents all passed on to me.” That non-Heiltsuk, non-Indigenous people in general also find the story entrancing—and Trickster Drift, which takes Jared from small-town B.C. to Vancouver, is as good as its predecessor—is a bonus. “I assumed when I started writing only my cousins would be reading me,” says Robinson, who cannot stay serious for long, “and that would see me through. I have a lot of cousins. Other readers, that’s been a very pleasant surprise.”

The trilogy naturally has its own origin story, one that explains how what began as a short story concept is now set to exceed a thousand pages before it’s done. It begins a decade ago, with Robinson’s participation in a University of Northern British Columbia writer and storyteller festival in Prince George. “One of the authors who was presenting before me was Richard Van Camp, and he told this utterly delightful story about the otter women going to the All-Native Basketball Tournament in Prince Rupert. The otter women still behaved [as they always did] in the traditional stories I remembered, although in those the otters were a lot scarier, but now they were in a setting that was very contemporary and familiar. And that stuck with me.”

The old stories were at the root of Robinson’s literary ambitions, in part, she insists, because “I’m a horrible oral storyteller. That’s an art, especially in my community, and not one of my strong points. I love writing because writing means editing, and editing makes me sound so much smarter.” There is probably some truth in that, modesty aside, given how competitively Robinson’s extended family told their stories. “I grew up with Wee’git [trickster] stories, the ones you told after dinner when everyone was smoking and drinking coffee,” says the former two-pack-a-day addict. “And they were the kind of stories you would one-up each other on, aiming for funnier, faster, crazier, louder.”

Robinson can check all those boxes with the pop culture-horror-comedy-Heiltsuk mythology mash-up that is Trickster Drift. A partial list of its characters, all key factors in the unfolding story, all sketched with verve and nuance, all perfectly at home in contemporary Vancouver, includes: a psychotic stalker on Jared’s trail; a sci-fi loving ghost parked in his apartment in order to watch Dr. Who episodes on an endless loop; the literally ravenous monster who lives within his aunt Georgina’s skin; and an ocean otter in supermodel human form, less vicious than her riverine cousins, but even more dangerous.

Still, it’s the first of those one-upmanship qualities that has always mattered most to Robinson, and perhaps never as much as now. “The older I get the less I inhibit my own sense of humour. It’s always been kind of loopy, but I’ve never let it out the way that I do now. So when my dad tried to tell the traditional stories to my niece and nephew, and they didn’t really have a context or understanding for the humour, I found that very sad.” All those factors went into triggering the Trickster trilogy. “I wanted a Wee’git story set in the present, with humour injected into it, I wanted to show how Canada is a different experience when you’re living in a company town or anywhere that’s not highly populated. I wanted to combine in a novel or three all the things I care about.” As for how well it’s worked out so far, two-thirds of the way through, Robinson agrees her elements have melded well. On the whole, that is: “Sometimes it took a lot of editing.”