REVIEW: Tutankhamen: The search for an Egyptian king 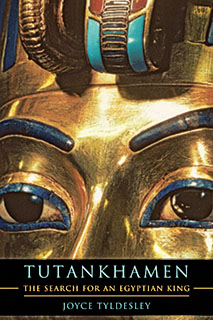 Like many a historical figure, the young man once named Living Image of the God Amen has had two lives. There’s his still murky actual existence as Pharaoh Tutankhamen, who ruled Egypt for a decade some 33 centuries ago, and his enduring place, as King Tut, in Western pop culture since archaeologist Howard Carter broke open his tomb in the Valley of the Kings, the only largely undisturbed royal resting place found in modern times, in 1922. Over the past 90 years, Tut’s legacy has included mummy films and mummy curses, countless Halloween costumes, the original blockbuster travelling art exhibition, and even Saturday Night Live skits, while his golden death mask, together with the pyramids and Sphinx, is among the trinity of icons that form our very image of Ancient Egypt.

Tut was perhaps eight years old when he came to the throne, and still a teenager when he died without heirs. His death at so young an age has prompted—in a demonstration of Tyldesley’s law that “any theory about ancient Egyptians, however unlikely, will be accepted as true by someone”—endless speculation. Malaria, murder and the congenital weaknesses often found in the offspring of incest (Tut’s parents were quite possibly brother and sister), all have their defenders, but Tyldesley interprets Tut’s pre-mortem broken leg as evidence of a fatal hunting accident.

But in truth the pharaoh looms larger in death than in life. When Lord Carnarvon, Carter’s backer, died of complications from a mosquito bite four months after the excavation, the legend of the mummy’s curse was born. That added fuel to the first bout of Tut mania, which survives in horror movies and popular songs, before coming to more respectable life with the 1970s travelling Treasures of Tutankhamen exhibition. It attracted 1.6 million visitors in London alone; the current tour has been seen by millions more.

Tut’s extraordinary afterlife, the story of our fascination with a man who had as much bling as any modern star, makes him, in Egyptologist Tyldesley’s judgment, the world’s oldest celebrity.

FILED UNDER: bookmarked Joyce Tyldesley Tutankhamen: The search for an Egyptian king