Why pet people are the animal lovers that wildlife needs 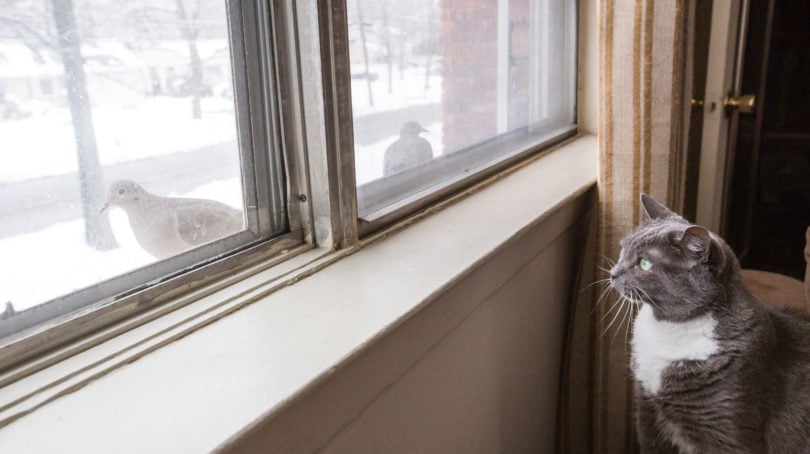 Peter Christie recalls how the “contradictions” in Charlotte’s Web, E.B. White’s classic children’s story of a kind-hearted spider trying to save a young pig from becoming bacon and ham, were apparent to his daughter, then four or five, when he read it to her years ago. Christie, a veteran Kingston, Ont.-based science writer, believes that what biologist Edward O. Wilson termed “biophilia,” humanity’s fascination with other life and living systems, is sunk deep in our DNA. And that the inherent fissures in that love and admiration—we eat those creatures, too—are rapidly widening as humanity’s relationship with the rest of the planet approaches a new turning point. “Of course,” he remarks matter-of-factly of his now-teenaged daughter, “she’s a vegan now.”

But it’s not the morality of meat consumption or the changing attitudes swirling around domesticated animals—conversations that have brought even horse racing under critical scrutiny—that animate Christie’s forthcoming book, Unnatural Companions: Rethinking Our Love of Pets in an Age of Wildlife Extinction. The greatest flowering of biophilia ever witnessed, notes Christie, is the explosive growth of pet numbers in the past couple of generations. Even a random selection of statistics is eye-popping: There are more pets—almost 400 million mammals, birds, fish, reptiles and amphibians—than people in the United States, where 30 million puppies and kittens are born every year; there are more than 1.7 billion dogs and cats on the planet, 16 million in Canada alone; more dogs than children in San Francisco; and, worldwide, pet care and feeding is a $116-billion industry.

Pets they are, too—very few dogs or cats earn their living any longer as herders, guides or mousers. Instead, they hold their place in our hearts through what Christie, whose family includes a dog named Maggie, calls an inscrutable and oxytocin-propelled emotional bond: “We look at them and they look back.” Increasingly, humans feel that those bonds—especially with dogs and, to a somewhat lesser degree, cats—approach the depth of our human ties. In a recent poll conducted by the dating service Match.com, even neutrality toward pets was a deal-breaker for two-thirds of animal-owning respondents, who asserted that a possible date “must love pets.” Other surveys indicate that significant numbers of owners would opt for their pet over their partner as sole companion on a deserted island. There are mall Santas with droppings-repellent suits who specialize in photos with pets, and pet psychics who will tell owners what Rex is really thinking.

This is biophilia on a strange, inward journey, Christie argues, a desire to bring the wild inside the human sphere and tame it, abandoning the true wild to its tragic fate. In a world where humans, between 1993 and 2009, turned wilderness areas that were collectively larger than India into farms, towns and mines, the sixth great extinction—the ongoing annihilation of wild animals in both population and species numbers—rolls on, with pets, pet owners and the pet industry major contributors. The irony of it all, says the author, is that “pet people are the animal lovers wildlife needs” if Earth’s fragile biodiversity is going to survive. Christie didn’t write Unnatural Companions to scold pet owners or argue for coercive laws, but to ask for their help, “to tap into their love for animals.”

Pet owners and conservationists have been at odds for years, of course, with the vitriolic cats vs. birds wars at the sharp end of the spear. Scientists have long known that North American cats, an invasive species on this continent, kill birds by the billions, and up to 350 million in Canada, annually. Domestic cats left free to roam are responsible for some of the carnage, but increasingly the toll is exacted by feral cats. Their colonies are a relatively new phenomenon in North America, one with tangled economic, social and gender roots. Low-income people who cannot afford pet care or, more often, cannot find dwellings that allow pets, frequently abandon their cats in the hope they’ll survive on their own. There’s a similar story behind many of the estimated 500,000 Burmese pythons now wreaking havoc in the Florida Everglades.

READ: A kangaroo rescue offers sanctuary in the wake of the Australian wildfires

The feral cat population is, consequently, highest in the poorer parts of any North American city; the depressed Ontario pulp-and-paper community of Cornwall accounts for almost a third of the stray cats handed over to the provincial SPCA. Colony “caretakers”—their preferred term—who provide food when they can, are generally single, middle-aged, relatively poor women. And they are ardent defenders of the species that, for all our love of dogs, probably best captures what Wilson saw as the root of biophilia: pure fascination. Cats are “liminal,” as Christie says: half uncanny creatures of the night; half cuddly, purring YouTube stars; entirely—and alluringly—mysterious.

The world’s 750 million cats are also the deadliest invasive mammal species known, linked to 60 species extinctions since Europeans first brought them to the New World (as long, that is, as we do not count ourselves—an intergalactic zookeeper assigned to Earth could well conclude that humans, who devastated large fauna everywhere they went, are the worst invasive species in planetary history and should be eradicated outside their home continent of Africa). Dogs, a billion strong, are linked to another 16 extinctions. With numbers like that, neither species is in danger of extinction itself while those they threaten are, making the issue of a feral cat cull ruthlessly logical for many conservation biologists. But not for cat advocates. Peter Marra, director of the Smithsonian’s Migratory Bird Center, who suggested as much, was showered with death threats. When Nico Dauphiné, a researcher at the same centre, was sentenced to a small fine and community service for sprinkling rat poison over food left for feral cats, the advocate group Alley Cat Allies declared, “Society can either lock her up permanently or idiotically turn her loose so she can continue to kill cats with impunity; there is not any middle ground.”

The other pet threats to wildlife do not, Christie hopes, involve the same raw emotions as the cats vs. birds gulf. They are not even as well-known. In Indonesia, trapping birds for the pet trade is the prime extinction risk for 13 songbird species and 14 separate subspecies even while their habitat remains intact (scientists suspect five of the subspecies are already extinct in the wild). There is reason to believe that Harry Potter’s popularity has led to a surge in owl trapping; in the 21st century, owls are a new presence in Jakarta’s bird markets. Some of the exotic pet trade is legal, but much is not, however lax the enforcement. Wildlife trafficking, at $20 billion annually is now the globe’s fourth largest criminal trade behind only drugs, counterfeiting and human trafficking.

Then there are the protein demands of the pet food industry. In the Western world, where dogs and cats are increasingly considered family members, pet food trends have tracked human trends—more health-focused, more “biologically appropriate,” and thus more meat-based. If they were a nation of their own, U.S. cats and dogs would be the world’s fifth largest market for meat. They consume a third of the animal-derived calories of American humans, including fish. The surging worldwide demand for pet food consisting of fish has made pets a major threat to wild ocean populations. One in seven boatloads of “forage fish”—sardines, anchovies, herring, all crucial links in oceanic and shoreline food ecologies—end up in pets’ stomachs at a time when the world’s fisheries are faltering. Christie knows that the cats-birds chasm is the widest he has to bridge, so he has an incremental, step-by-step approach for everything he wants to see happen. Cat advocates are defending lives they know and to which, at least in the case of house cats, they have given names. And an animal with a personal name, like Wilbur the pig in Charlotte’s Web, is much harder for a human to kill or allow to be killed. Wildlife, on the other hand, is just an undifferentiated mass of animals. Like the Smithsonian’s Marra, who speaks often of the emotion evoked by holding a songbird in the palm of his hand, Christie has done a lot of fieldwork as a biologist handling animals. “You’re holding a warbler, witnessing its panic, its heart rate going a million miles an hour, its whole life laid bare in front of your eyes—and, you know, you really do want to give it a name.”

For Christie, then, the first step is to convince pet owners and wildlife lovers that “they are members of the same tribe, all drawn to other forms of life.” Next is to tell cat lovers—and mean it—that culling cats is off the table. “And I wouldn’t even tell every cat owner they have to lock the cat inside when their habits and culture have always been to have outdoor cats.” Then, he’d ask them to consider “just one or two aspects of your pet-keeping”—there’s evidence that bells, bibs and claw-clipping cut down on cats’ catch numbers; perhaps they can be kept inside a bit more, or owners can decide that their next cat will be an entirely indoor animal.

The same small steps—including lowering the amount of protein in what owners feed their dogs—could lead to major impacts when magnified by the 250-million-strong buying power of North American pet owners. “I have a sense of possibility that the pet industry can be made to see and respond to its responsibility. Spending on pets is huge, so maybe providing a small portion—five per cent, one per cent—to some conservation cause would be another brilliant thing a pet owner could do. But the main thing I would like to see is people expressing their demands to the pet industry through their wallets to get the industry itself to move further and faster in terms of sustainability and transparency in sourcing pets and regulating pet sales to some degree.”

Given the passions swirling on all sides, the power of the biophiliac bond itself and the money involved in the pet industry, Christie is quick to admit “there’s an element of magical thinking” in his hopes. But that’s no reason not to try, especially on the industry side, where consumer pressure—which has led to eco-labelling in cocoa and coffee—is a powerful force. As for changing minds and hearts, Christie says, “I can only keep trying to move in that direction or else I can just stop moving altogether.”

This article appears in print in the May 2020 issue of Maclean’s magazine with the headline, “Animal lovers needed.” Subscribe to the monthly print magazine here.