Canadian author Esi Edugyan: 'We have to be on guard against darker things. To not discuss them is to open up the potential for a blind spot or forgetting.' 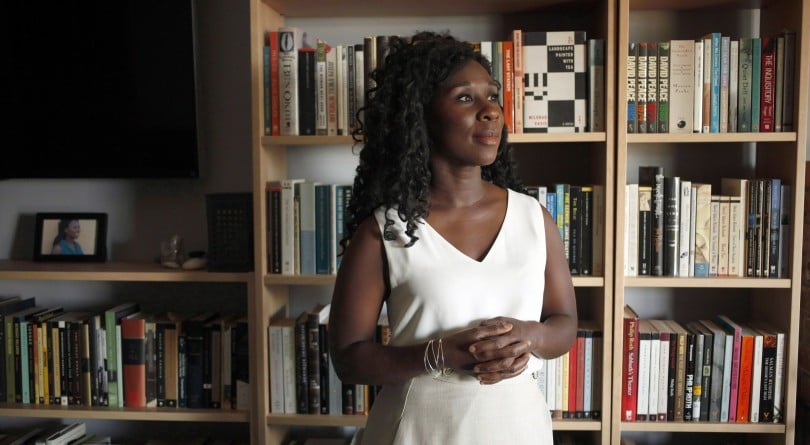 Esi Edugyan’s first novel, The Second Life of Samuel Tyne, was well received, but it was her sophomore 2011 novel, Half-Blood Blues, that earned the Calgary native international acclaim. It tells the story of an interracial jazz band popular in Berlin during the late 1930s. In 1940 the group heads to Paris, where their brilliant Afro-German trumpet player, Hieronymus Falk, is arrested by the Nazis. A work of startling originality, Half-Blood Blues was shortlisted for the Man Booker Prize and a Governor General’s Award, and won the Giller Prize. At first glance, Edugyan’s latest work, about a boy who flees Caribbean slavery, appears a more conventional tale. But her eponymous hero, Washington Black, is also gifted, an illustrator who escapes by way of hot air balloon, launching a quest for freedom that carries him halfway round the world. The extraordinary novel, whose central focus is the nature of freedom, is on the long list for this year’s Man Booker Prize. On the line from Victoria, where she lives with her husband, the poet and novelist Steven Price, Edugyan discussed the motivation behind her book and her complicated relationship with the African past.

Q: How did the idea for this novel come about?

A: I set out to write a novel about the Tichborne case [1867-1874], which was one of the longest-running criminal trials in British history. I wanted it told from the perspective of Andrew Bogle, an ex-slave who had been a servant at the Tichborne estate. Bogle was taken off a Caribbean plantation by a visiting member of the Tichborne family—he worked for the Tichbornes for many decades. Shortly after his retirement, he would come to act as main witness for a man accused of falsely claiming be a Tichborne. Almost from the first I realized I was interested in Bogle’s displacement—his having passed his boyhood in the brutality of the plantation to be suddenly wrenched up and taken to a place so culturally, socially and geographically different from his own.

Q: Your parents immigrated to Canada from Ghana, which means your own ancestors were not sold into the Atlantic slave trade and stayed in Africa. How did this reality affect your book?

A: When I was feeling around for subjects, I was batting around a book about slavery—a book about the relationship between Africans involved in the slave trade and the people they captured. My ancestors were there and I wondered, historically, what their role might have been. But then I became overwhelmed because my relationship with Africa is—I don’t know—obviously ancestral. I wanted to set something entirely in Africa but seemed undone by the task. I couldn’t muster the psychological energy. The material pushed me away and pushed me away. I just couldn’t do it. Washington Black comes out of thinking about that book. This novel was draining in a different way.

Q: In your published lecture, Dreaming of Elsewhere, you vividly describe a 2007 visit to your father’s village in Ghana. Have you had an opportunity to return?

A: No, after that visit, I’ve never returned. It gives me great sadness to think that I’ll probably never get the chance to return there with my father, who is nearing 80 years old. It was such a life-defining trip, and the stars seemed to have had to align to make it happen. So many people in that village have since passed away; there have been so many tragedies. My memories of everything as it was all those years ago are still strong and I still feel a very deep connection to the place, despite my sense of un-belonging. When they are old enough, I’d like to show it to my children.

Q: Some young black people say they are tired of reading novels about slavery and even novels about racism. Why do you consider the subject worthwhile?

A: I can understand young black people not wanting to be defined by this defining historical wound, not wanting to say, “This is all we are, and this is the baggage we carry and live under.” In the same way, a friend of mine says she feels the burden of the Holocaust when she is travelling and tells people she is German. She feels like the Holocaust is something she is carrying around. Obviously, it’s extremely important for us to still be talking about these things and to understand them. Even in the States and many other places today people feel there is an alien element coming into their space…and this is like it was with Nazi Germany. They’d gone through this terrible economic period and there was the sense of Jews being the great “other.” When you look at history you are thinking critically; you see these recurring motifs. And being aware of them, you can be more on guard. We have to be on guard against darker things. To not discuss them is to open up the potential for a blind spot or forgetting. We won’t recognize the similar patterns. We must be on guard for those darker impulses within ourselves.

Q: Black Canadian novels are often said to be about belonging. What interests you about that subject and what bores you?

A: What bores me is this radio-friendly version of belonging, because belonging is so complicated and means different things to different people and is always shifting. There is this manufactured feeling of belonging: we’re holding hands, we all get along. Slightly problematic, because it’s not reality. All of my novels involve the struggle to belong. Because if you are not allowed to be who you feel yourself to be, it can be intensely painful. In the novel, Washington Black is struggling to find his foothold. Displaced people are still experiencing this and that interests me.

Q: One of the things I love most about your work is that it can be so playful. You must have had an enormous imagination as a child.

A: My siblings and I used to put on skits and dance. We would write stories and plays. I thought I was going to be an artist when I went to university. But my mother said I couldn’t make any money doing visual arts. I ended up taking journalism courses. But I didn’t want to approach people. I think I made a fair number of articles up. I still have a full rack of drawings and paintings. I love to do people, not traditional portraits. I liked acrylic paints; I was just getting into oils. I gave it up. I did a few courses at Alberta College of Art and I did a few at the University of Victoria—photography and painting.

Q: Most of your protagonists have been men. Has anybody complained about this?

A: Oh yes. Writing male protagonists is partly a way for me to distance myself. It allows me to create these personas. I did write a novel with a black woman and finished it, but it was very flawed. My next novel is about women.

Q: You seem to put a great deal of thought into your characters’ names. Can you talk about that?

A: I think it is important to get the right names. They are not arbitrary. Like with Samuel Tyne, in my first novel, it was very important that he had an English name that set him in opposition with his neighbour. Hieronymus Falk is a mouthful of a name; a German name, so tied to that culture. When Washington’s owner names him George Washington Black, it’s a mockery. As if to say, George Washington was a man of greatness. Wouldn’t it be funny to give a slave his name?

Q: Washington is a gifted illustrator and Hieronymus Falk, the trumpet player in Half-Blood Blues, is described as a genius. How would you define genius and why does it preoccupy you?

A: Genius is the ability to make connections that it would take the rest of us much longer to make. Geniuses go straight from A to D, making leaps that are invisible to most people. That’s really interesting. My sister was a brilliant child, naturally intellectually gifted in a great many areas. Teachers wanted to skip her several grades. You kind of wonder about that. How does genius affect people’s sense of the world, their sense of themselves? I was reading an article about Stephen Hawking. People talk of him being impatient and intolerant with individuals who weren’t as quick. Think how distancing it would be if people couldn’t see things as you saw them. It could manifest as a lack of generosity or the opposite. In the case of Hieronymus, he doesn’t want his genius to create a buffer. But his genius begins to erode the relationships in the band.

Q: On a personal note, how did you manage to complete this book when you had a toddler and a newborn and a husband who was working on his own 19th-century novel?!

A: It was a hard time in the household. Steven was just editing Gaslight, and he’d be on the phone with [the late editor] Ellen Seligman for eight hours. And then we had the baby who didn’t sleep. Two hours at most. I had made the mistake of trying to start this book. The first 50 pages took forever. Then finally, I just gave up. And that was the best thing. When I could get my wherewithal, I started up again. I feel like both of these books were written through exhaustion. It was a feat to get to the desk and keep my eyes open. By the time I got to the last chapters of Washington Black the baby was in daycare. I was sleeping more. Then when the children were in bed at night, I would do better.